A woman’s relevance rises above the pointing heads of misconceptions, beliefs, and traditions, her relevance isn’t seen but felt.

A woman’s relevance is not weighed by strength nor by power, does it come from the joy she brings, by the smile she puts on your face, by the memory she imprints in your thoughts

The lightness in her tongue carve out words that shake up the foundations of a home, delicately arranging the tide at dawn and at dusk

Who then celebrates the greatness of a woman?

Who gives credit to her as she combs the land with fertility and patiently waits for it to grow and blossom, as she cooks freedom and serves happiness?

A woman’s relevance stands above comparison, intimidation, and stereotypes,

She molds, she builds, she keeps, opinions don’t make her less beautiful, she swallows and is the hallow of peace, as she makes the world silk.

Like celebration, a woman is an apparel, filled with curves and flourishes, when life screams she is calm, when life whispers she listens, through her eyes the script of living can be read, the relevance of a woman isn’t seen but felt,

A woman is an armor, a wing, a fleshed root with mind and body, an ocean to be sailed on, from her loins the winners of the world cry, and from her chest she feeds light in the world.

In the sound of her voice comes a calming influence that makes her difficult to forget, she carries fire from the crown of her to the sole of her feet, in a room full of shadows she remains different a woman because her relevance can’t be seen but felt,

The aura of a woman can swirl thoughts, fight insecurities convincingly, it can deliver,

A woman is a seed of transformation, her relevance isn’t seen but felt.

Love isn’t for those with milk teeth”

Before you let a man taste spring from the deep of your oceans, do not let him fetch from the fragile of your shores,

They didn’t tell us how to avoid the attractiveness of those men who were temporal sailors.

The day she came home blanketing a different smile ear to ear, telling you how she met prince charming, how her knees went numb anytime he threw a smile at her,

You helped her pick a dress for the next date, you watched how her giggle twirled back to defense when he called her on phone,

You watched how she made room “to love him”, how she glowed like the azure of the sky when she called him “the absolute love of her life”

You weren’t surprised when you saw their lips fall on each other the Saturday he dropped her off,

You were happy she was happy.

It happened the day insomnia stepped in,

She ran to the bathroom with a twinge of nausea, she asked you what date it was,

She told you her period was late,

As days passed, you watched her hold her breast, she brought them to your face asking if her areolas were dark,

You tell her to take a test, but she told you, you both knew what it was already,

You watch her call prince charming, you watch the word pregnant form and break from her lips,

You watch him ignore her, you held her as she cried,

You knew that love made her choices vulnerable especially when she told you she understands him,

You held her telling her she could still change her mind,

That was the last day you held her

You watched her wail and bleed to death. 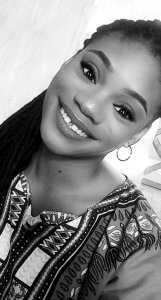 If You Believe In Storytelling, You Should Take The Pixar Free Online Lessons In Storytelling
What Are Some Of The Things People Search For When They Add 'Women' To Their Google Search Queries?
3 Important Rules on How to Pick Your Freelance Writing Niche | Carol Duke
21 African Creative Women: Ope Adedeji
On Radar: H3rizon, The Australian RnB Girl Group Putting Out Serious Hits And Empowering Women of Co...