I stumbled on Taiye Idahor’s Instagram Page during one of my wanderings and saw a stunning, ethereal image of the traditional Benin beads made into a work of art representing a regal woman. This image was at first fascinating and then became deeper for me because of the woman form that it depicted, so I went to find out more about the art. Turns out Taiye Idahor was holding a solo exhibition at Tyburn Gallery titled ‘Òkhùo’, a reflection on the relationship between womanhood, power, and history. 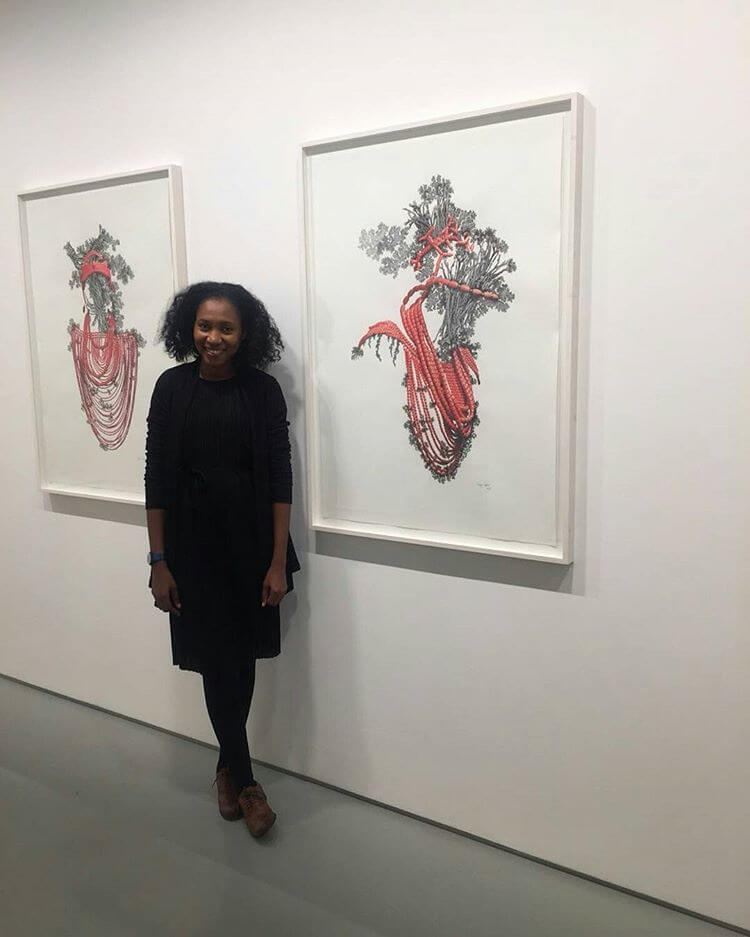 With Òkhùo which translates to ‘Woman’ in the Bini language of Benin City, Taiye Idahor presents a reflection on women and power through the iconic figure of the Iyoba, mother of the king of Benin City. Like the king and high-ranking chiefs, the Iyoba’s traditional regalia involves an elaborate ensemble of coral beads. These beads have become a symbolic representation of women’s authority and influence.

Taiye Idahor traces her heritage to the ancient empire of Benin City, whose history and iconography she references in her practice. Working within diverse media – sculpture, collage, drawing, and installation, she explores layers of themes which are simultaneously universal and intimate, expressing female and African identity within the broader contexts of history, tradition, and globalisation.

#Repost @andfotography (@get_repost) ・・・ @taiyeidahor#afroart#nigerian#Maria The artist with her favourite piece!

The Exhibition is on until the 9th of May. You should go check it out at Tyburn Gallery if you are in London.

Taiye Idahor was born and grew up in Lagos Nigeria. She studied Fine Art at the Yaba College of technology Lagos Nigeria where she graduated in 2007 with a Higher National Diploma (HND) in sculpture.

In the last six years, Taiye Idahor has worked consistently and significantly within the concepts of identity and women using “hair” as a visual language in her work. Tangled through the issues of trade, beauty, the environment and globalisation, she examines how these factors build the woman’s identity including hers in today’s Africa but in particular Lagos Nigeria where she has lived most of her life.

Apply Now for the Femrite 7th Regional Residency for African Women Writers
Google Launches Online Latino Art & Culture Exhibit
If Disney Princesses Were Alive In 2017: Fernanda Suarez Shows Us What They'd Look Like
Unwrapping the Years: Our Impact So Far!
10 Creative Things To Do During Quarantine / Lock Down By Lorna Abwonji