Career Migrants: Nadja Oertelt Of Massive On The Confluence Of Science & Media

How do you make the spirit, expertise, and details of science/scientists exciting, accessible and interesting to the world at large? How do you make the ecosystem of science entertaining and informative to the public?
These are the questions that Nadja Oertelt tackles as she runs co-runs Massive. Massive is the first community built specifically for people who enjoy the act of learning more about the world, people who just can’t stop wondering. They started with the most science-curious of all – scientists themselves – by teaching them how to talk about their work in ways everyone can understand and enjoy. Massive’s community of scientists is now over 100 members strong (and growing), and they want to discuss the strange and wonderful universe with other science-curious people.

Nadja Oertelt is a co-founder of Massive, the science media company that aims to engage the public and scientists in new ways. She is a former research scientist, and she currently works as a media producer and documentary filmmaker. She likes to bring art into quantitative spaces.
Previously, Nadja Oertelt worked as a senior producer at Mashable and was once a science producer at Buzzfeed and Vice. She worked at HarvardX for almost four years producing The Fundamentals of Neuroscience. She graduated from MIT in 2007 with a BS in Neuroscience and she worked in labs at MIT, Harvard and Cambridge University and lived for many years in London. She is now based in NYC and rides her bike across a big bridge every day. 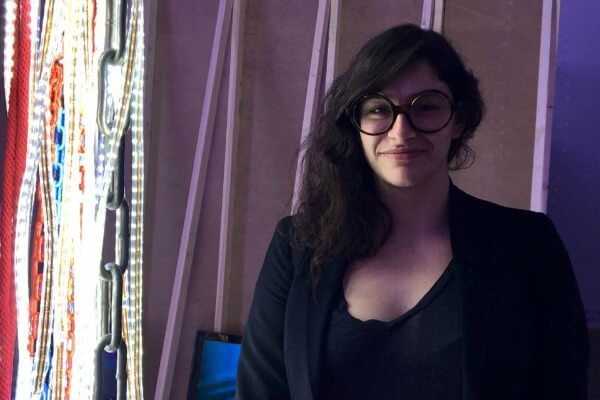 Here we interview Nadja Oertelt for our Career Migrant series:

For Creative Girls: We would love to know your story and career journey into being a Documentary Filmmaker and a research scientist. Can you walk us through your story and journey from what you studied in school till now?
I went to MIT as an undergraduate in 2003 and was a Neuroscience major. But I had always had an interest in photography and the arts. So when a new neuroscience friend at MIT, Anna Wexler, suggested we make a documentary together our freshman year, I jumped at the opportunity. MIT was also the kind of place that allowed undergraduate scientists to do minors in media and film, so I was fortunate enough to study with the avant-garde filmmaker Joe Gibbons, who supported Anna and my mission to make a feature-length film while studying. Both she and I conducted research and published in neuroscience labs at MIT and Harvard (and Cambridge University) while making a documentary about religious orthodox Jewish teens rebelling in the US and Israel (Unorthodox). This film took us over a decade to finish, and while that was happening I also transitioned from working in a lab to working as a producer. I worked very early on in my career doing freelance work for Vice, and then eventually produced a huge, online episodic neuroscience course at Harvard for the public. That led to a residency at Buzzfeed and a job as a senior producer at Mashable. Now I have my own science media company, Massive, which allows me to work with scientists to help them tell stories. So I guess I’ve merged everything I like to do into one job!

What specific moments led to you migrating in between two fields?
I like to think that it hasn’t been a migration, but is more of a merger. I have been fortunate enough to be able to work with a lot of amazing animators and artists, producers and media makers, and still maintain a connection to the scientific community, which is important to me.

A Snippet of Massive’s Website with a couple of Nadja’s work.

In your experience and opinion, Why are we as humans insistent in creating a dichotomy between Science & Art? Is it just a labeling issue or something a bit more egotistic, or a difficulty to cohabit?
Scientists and artists are both asking similar questions about the universe, but they are expressed in very different ways. The process that is science and art is also very different. But those differences are quite beautiful because the process behind them reveals something beautiful about humanity: our ability to construct stories about why the universe is the way it is.

And how can we make STEM & Arts/Humanities cross-pollinate better?
I think scientists are very good at what they do, and so are artists. I would say that when these specialists are allowed to work together, their work and views become more powerful. But fine artists are not scientists, and scientists (for the most part!) are not the greatest fine artists. So I think creating venues and pathways for the two worlds to communicate is a positive thing.

Tell us about stories that you hope to create in the near future and the overall legacy you intend to be known for.
I want to create a world where everyone can think in a scientific way. I want people to have knowledgeable agency in the processes of science that will influence their future and the future of our species. That’s why I created Massive and that’s why I want to work with scientists to help them reach the public in ways that everyone can understand.

All of Nadja’s work over the years can be found on her website, and if you are like us, you’ll most likely be glued to her website for hours feeding your curiosity.

Want To Get Into The African Tech Industry? Kelechi Udoagwu Has Created A Show For You
Translating Emotion into Art: Meet Rukmini Poddar, the Artist Drawing Emotional Struggles & Internal...
Awazi Angbalaga on Becoming an OAP at Soundcity & Combating Body Shaming in Girls
Dami Odufuwa is Kicking Patriarchy in the Butt with Wine and Whine NG
21 African Creative Women: Esperance Tabisha