Embracing Your Creative Soul: Jessica Bongos-Ikwue on Music and Songwriting

Jessica Bongos-Ikwue is this beautiful and soulful singer whose music is heart-soaked with effortless mindfulness. We could say that her talent is inherited, but we know this goes way beyond genes! She is remarkable. In this interview, Jessica shares how she recognized her core strength and embraced the entirety of what she really wants to be.

For Creative Girls: Your music in itself is a creative muse! How and when did you start writing and then singing, or which came before the other?
Jessica Bongos-Ikwue: Thank you. I’ve always loved music. That might be an understatement actually. Lol. But you know what I mean. I listened to music so much growing up and I would sing all the time. A friend of mine once joked that I sang more than I actually spoke. And she may have actually been right. So, I’ll definitely say I started singing before I started writing. I started singing professionally in 2006. My sister and I sang backing vocals for my dad. We recorded backing vocals (mostly harmonies) on his newer songs. That was my first ever studio experience and I loved it. It was during this time that I started considering doing work of my own, but I didn’t take it seriously because I never wanted to be in the limelight. I really just wanted to stay in my little bubble and keep on enjoying music by listening to it.

A few months before I turned 30 a few years ago, I had a lot of time to reflect. I think when you turn 30, something snaps in you. Like Oprah would say, “I had an a-ha moment”. I suddenly didn’t care about my insecurities of being judged by the public, my stage fright, losing rights to having a private life, etc. I realized that 3 decades had gone by and I wasn’t doing what I loved the most in life! Would God be happy that I wasn’t using what He had given me? I don’t think so. So, I gave myself a little pep talk and the journey began. I wrote my first song “You left me” at the age of 30.

What were your next steps after realizing you wanted to carve a path for yourself in music?
I wasn’t sure at first what I needed to do. Here I was at 30 with no knowledge of music theory, no vocal lessons, and no experience performing live in front of an audience. I decided to start writing songs first. One evening, I went to Laolu Sebanjo’s (an amazing musician, visual artist and body painter) show in Abuja called “Laolu and friends”. At this show, my EP producer, Atta Lenell performed an acoustic set and I thought he was amazing. I had heard of him and I loved what he had done with Lindsey Abudei’s EP, but I had never met him. I spoke with him briefly after the show and mentioned that I would love to work with him. We exchanged numbers, I called him up and we had our first meeting. I was so nervous. I thought “What if he thinks I’m crap and refuses to work with me”? Thank God that didn’t happen. We worked really well together. After doing the first song with him, I knew I wanted him to produce the entire EP. The EP didn’t take too long to produce. Once that was done and released, it became real to me. A friend said to me, “this is a big deal. Once your music is out, that’s it! There’s no going back”.

I also created a platform for myself to perform live monthly by starting a monthly open mic show called CAMPers (Comedians, Artists, Musicians and Poets expressing real stuff). This was deliberate because I knew I needed a lot of experience on stage and most importantly with a live band. I can definitely say the more one performs live, the more comfortable one becomes on stage.

Lord knows, I didn’t have a set plan before the release of my EP. I just knew I had to put something out and I had to work on my personal growth musically.

Which artiste will you say has influenced your style the most?
Wow. This is a really tough question for me to answer because I’ve been influenced by so many artistes for different reasons. I can’t pick just one. I’ll say Lauryn Hill for her depth and important message. Jill Scott for her sass, attitude, music style, vocal dexterity and her interesting stories. Norah Jones for her lyrics and that oh so peaceful, soothing sound she creates. Sade Adu for her sultry, sensual sound and for her class and elegance, and Fantasia for her soul, her runs, her rasp and her electrifying live performances. She brings tears to my eyes every single time I watch her. I’ll stick with these 5. Oh, I have two more. Lol! I love Laura Mvula and Adele. 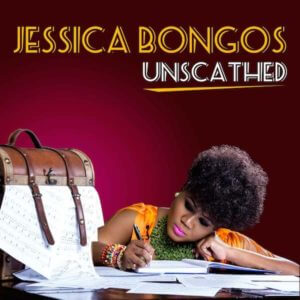 Artistes and creative people at large are shaped by experiences or different pockets of event. What experiences have shaped you and your music?
Relationships and just life in general. I think singers/songwriters write according to what’s inspiring to them at that point in time or phase of their life. For me, when I wrote the “Unscathed” EP, I was writing songs that were not so happy. I thought I was happy and I wasn’t sure where these songs were coming from because I thought I had let go of negative experiences from the past. Could I have been writing from my subconscious? I realized that I wasn’t really happy then. Fast-forward to 2 years later. I look at some of the songs I’m about to record and it’s interesting because clearly, I’m in a new phase in my life and these songs reflect new inspiration, a new outlook on life, a happier place. I love it!

You seem to have a folklore mixed with realism tinge in your lyrics and sound, is that intentional?
I wouldn’t say it’s intentional. It’s just me. In all my truth and honesty. Any other approach would most likely come off as fake or trying too hard to be something else. I’m just staying true to myself.

When you can’t feel your writing mojo, what do you do? Do you have any rituals that ignite your creative and writing process?
Lol! No rituals. I just let it be. I’m beginning to understand my creative process more. Everything flows better for me when it isn’t forced. I have never once sat down with a pen in hand and a notebook in front of me with the intention of writing a song. Well, I did when I first started songwriting and nothing came out of that. I ended up staring at the blank page for hours. I was in the bathtub when “Walking away” came to me. The whole song. Not in parts. I jumped out the shower, grabbed my phone, sang into it and sent it to Atta. It’s my favourite song on the EP. Sometimes, I hear a melody and lyrics in my sleep and literally jump out of bed, quickly record it into my voice memo, look up to God and thank Him. Because let’s be honest, a song that comes to you when you’re deep in sleep can only come from God. I do nothing. I just wait till God sends me a word. A word becomes a line. A line becomes a hook. A hook inspires the verses and the bridge and the song in its entirety. I think a change in environment is also a good thing for songwriters. Once in a while, move to a new place, travel, observe the people and new cultures.

Man and Man. What inspired that particular song?
Ah! “Man and man” is actually a cover. The original song was written and recorded by my dad, Bongos Ikwue in the 70s. I love the song so much, I had to record my version of it. 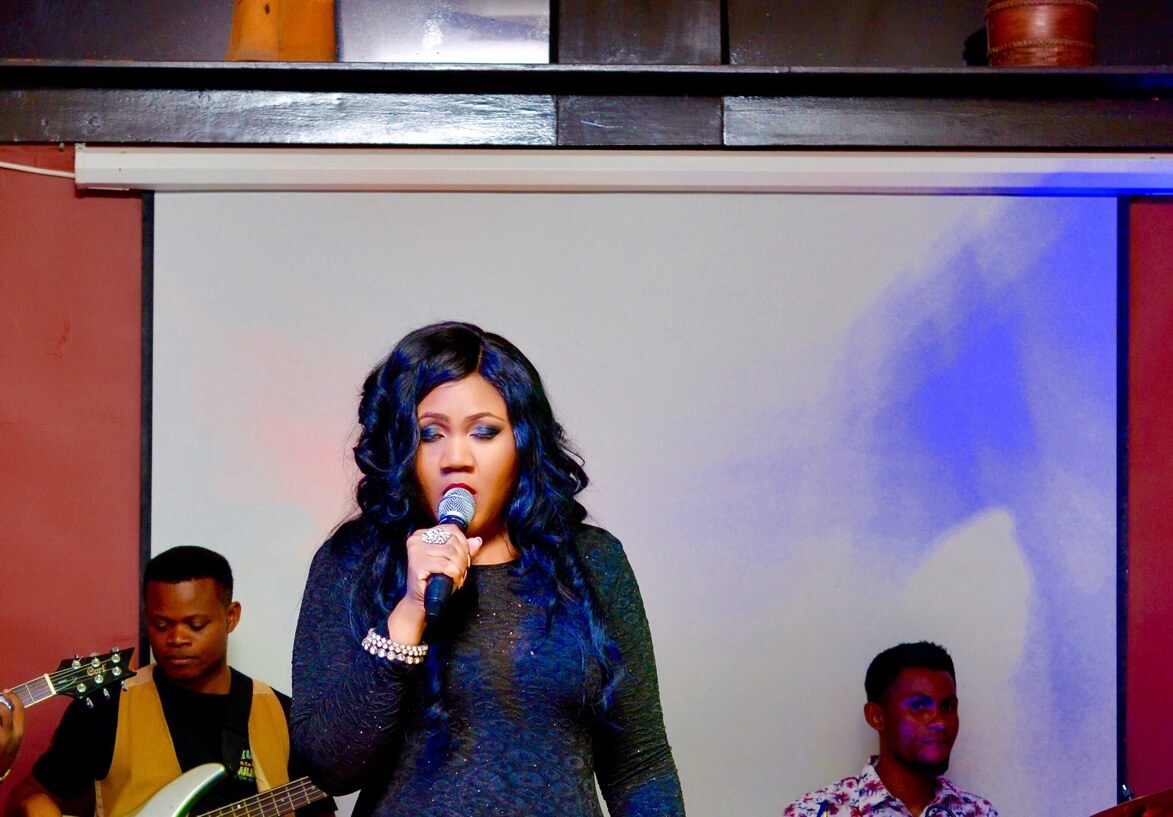 Do you make money from your music? Or do you have a 9 to 5 job? How do you make money?
I don’t make as much money as I would like to yet from music. I play little gigs here and there mostly to earn money. I’m self-managed and an independent artist, so it is quite challenging. I don’t have a 9-5 job. I used to be a full-time caterer but I had to stop catering shortly after I decided to do music full-time. I personally think that music as a profession should be taken seriously and has to be nurtured. I’m very committed to everything I do. So, if I had a 9 to 5, I would be committed to that and my dreams of being a full-time singer, songwriter, recording artist and performer would die and I would be depressed doing that 9 to 5 job anyway. Money is important but not important enough for me to give up my dreams, happiness and living a fulfilled life. I truly believe that if you’re passionate, consistent, hardworking, easy to work with, and have an understanding of music business, the money will come one day. Baby steps. We’ll get there.

What’s your daily routine and creative process like, what does a typical work day look like for you?
Hmmm. Very unpredictable. The only thing that’s constant in my daily routine is my morning walks. I try to rehearse with my band as often as possible so that whenever I’m booked to perform at an event, we’re ready. Some days are spent in the studio recording on other people’s songs as a featured artist. Some days are spent writing business plans and proposals. I’m working on setting up a small business still along the lines of creative arts. Some days are spent responding to e-mails and negotiating. Because I’m my own manager, I don’t have the luxury of just being a creative. I have to be my own publicist, actively get gigs and negotiate with clients, update my website and social media, worry about styling myself for events. I have to be my own accountant and handle contracts and all the financial back end. But most recently, a lot of songwriting as I’m about to start recording my debut album. I spend a lot of time re-writing and arranging the songs for the album.

It’d be cool to be able to easily find the lyrics to your songs. Where do we go to find them?
If you download the EP directly from my website JessicaBongos.com the lyrics automatically get downloaded with the songs. The website is under construction for now but will be up and running in a few days.

And we love love how your producer works on your music! Tell us about new projects we should expect.
Thanks! He’s amazing. He always does what’s best for the song. Check out AttaLenell.com to listen to some of his work on other artists songs. New projects you should expect are; a video for at least one of the songs on the “Unscathed” EP this year. A single in a few months, and my debut album by January. All of this by the grace of God.

Karmen Wessel: 100 Days of Drawing Drag Queens
Three Famous Women Pen Thank-You Notes to Michelle Obama for Being a Fabulous First Lady
Areeba Siddique's Art Is For People Who Dare To Be Different
Meet The Indian Family Where Mum, Dad, Daughter Are All Pilots
Meet The Women Winners Of The 2017 MacArthur Genius Grant