Emerline Ji Of CreativeMornings On Finding & Doing Her Dreamwork

CreativeMornings is one of our favourite platforms! It’s one platform that we stalk and follow all the time. So, when we heard Tina Roth Eisenberg (the Founder of CreativeMornings) talk about her team member, Emerline Ji and how she is absolutely amazing, we knew we had to get to know her. So, we went astalking!
Emerline Ji is one of those people whose presence of mind exudes out of them into everything they do. She is effortlessly creative, you won’t see a slime of struggle flowing out of her. She doesn’t ebb away at tasks and new ideas. She’s a natural people magnet. 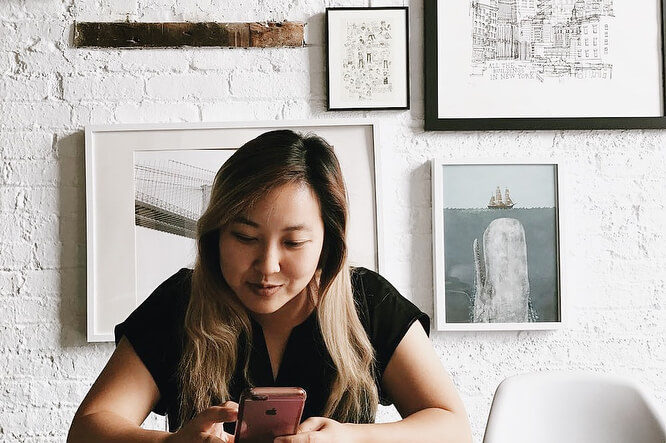 Emerline Ji was born in Michigan, raised in California, and now living and working in Brooklyn, New York. She moved to New York City at the beginning of 2016 to work with the people, organizations, and companies she’d admired from afar.
She joined the wonderful hardworking CreativeMornings HQ team in the fall of 2016. Outside of CreativeMornings, she enjoys creating content, dancing and traveling whenever she can. She’s usually updating her whereabouts and daily happenings on Instagram.

For Creative Girls: We really love how you uprooted from where you grew up to take the risk of working with companies you love. Can you tell us more about what led to making that decision, the journey/story so far? Were you afraid?
I wish I could say that I had a grand strategic life plan of moving away from home, but most of it happened pretty organically.
During my fifth year of college, I had a lot of time to myself. I’d changed my main major late into the game so it took me a bit longer to graduate from college than most of my friends. Those last months of my college career were the most memorable ones. Hands down. It was an intentional learning period that was full of experimentation and it was refreshing to be able to take the time to explore my interests. I took random elective classes in jazz dance, art theory, and business purely out of curiosity and wanting to try new things. Outside of class, I read marketing books, journaled my thoughts every day, attended free local creative events, devoured podcast interviews, and started a lot of random side projects. I asked a lot of questions. A lot of questions to other people and to myself.

It was during this time that I applied to be a student brand ambassador for a tech company in New York City. One of the perks that was promised included being introduced to an employee working for their company who’d mentor and help advise ambassadors on our resumes and cover letters. My mentor and I had three phone calls in which she kindly did her part in giving me general feedback. I also asked her a lot of questions about her career and what it was like working in communications. After the three scheduled calls, she said that if I was ever in New York to send her an email. I just laughed and said I would.

Months later, I finally graduated with my bachelor’s degree and was able to land a part-time gig in Los Angeles at a coworking space. All I knew at the time was that I wanted to be around creatives and entrepreneurs so badly. I was leaving my house before 6:00 am and coming home at midnight to avoid traffic. After work, I would wait inside a coffee shop writing, reading, or interviewing local creative people to try and use my time productively. After about eight months, I got physically burned out from the grueling commute and quit. I felt like a failure being without a job title again. Some of my close friends at the time were planning a short trip to Asia so I decided to join them to get out of the feeling.

During the Asia trip, I received an email from that contact in NYC asking if I was planning to visit New York anytime soon. It had been almost a year since our last exchange. She asked in her second email if I’d be interested in an internship on her team! Since I was already traveling, I decided it wouldn’t hurt to try and at least visit. I had never been to NYC and I thought it’d be a great learning experience even if it didn’t work out. I called the only family friend I knew in New York who kindly housed me for an entire week. It was so surreal to actually meet my contact for the first time in person and going through their formal interview process. Shortly after returning back to California, I got a message from their HR department saying that I’d gotten the internship.

The time span between receiving that first email in November 2015 and literally getting on a plane to move to New York City in January 2016 was only a little over two months. My family and I cried a lot as I hugged them goodbye at the airport.

I was definitely afraid. It’s not easy suddenly leaving behind everything that’s familiar and the people you love to go tackle the unknown. The important thing though was this: I had always been more afraid of getting stuck in my comfort zone and never being able to test my potential in a new environment than I was of moving alone. The reality of settling and just becoming like everyone I grew up around felt scarier and more like a risk. 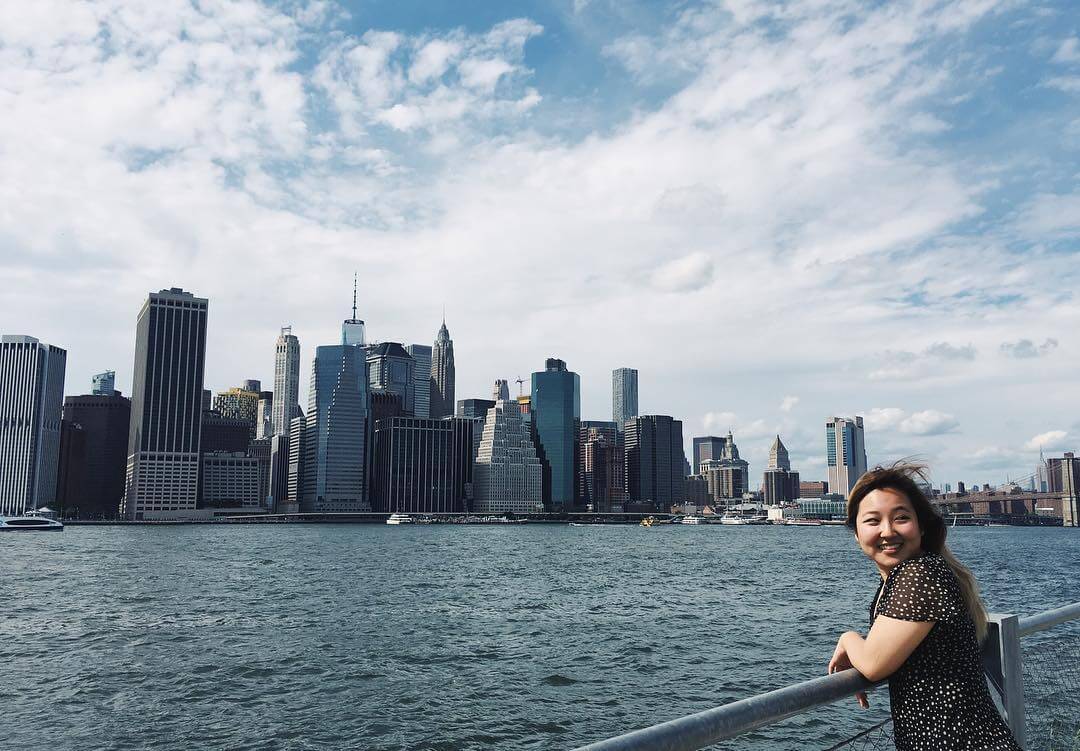 This means that my day to day involves a lot of visual content production (writing, editing, deck building, emails, basic coding, etc) and developing simple communication strategies for our projects. My training in narrative journalism, background in PR, and love for technology has resulted in me having a job my parents still don’t understand. 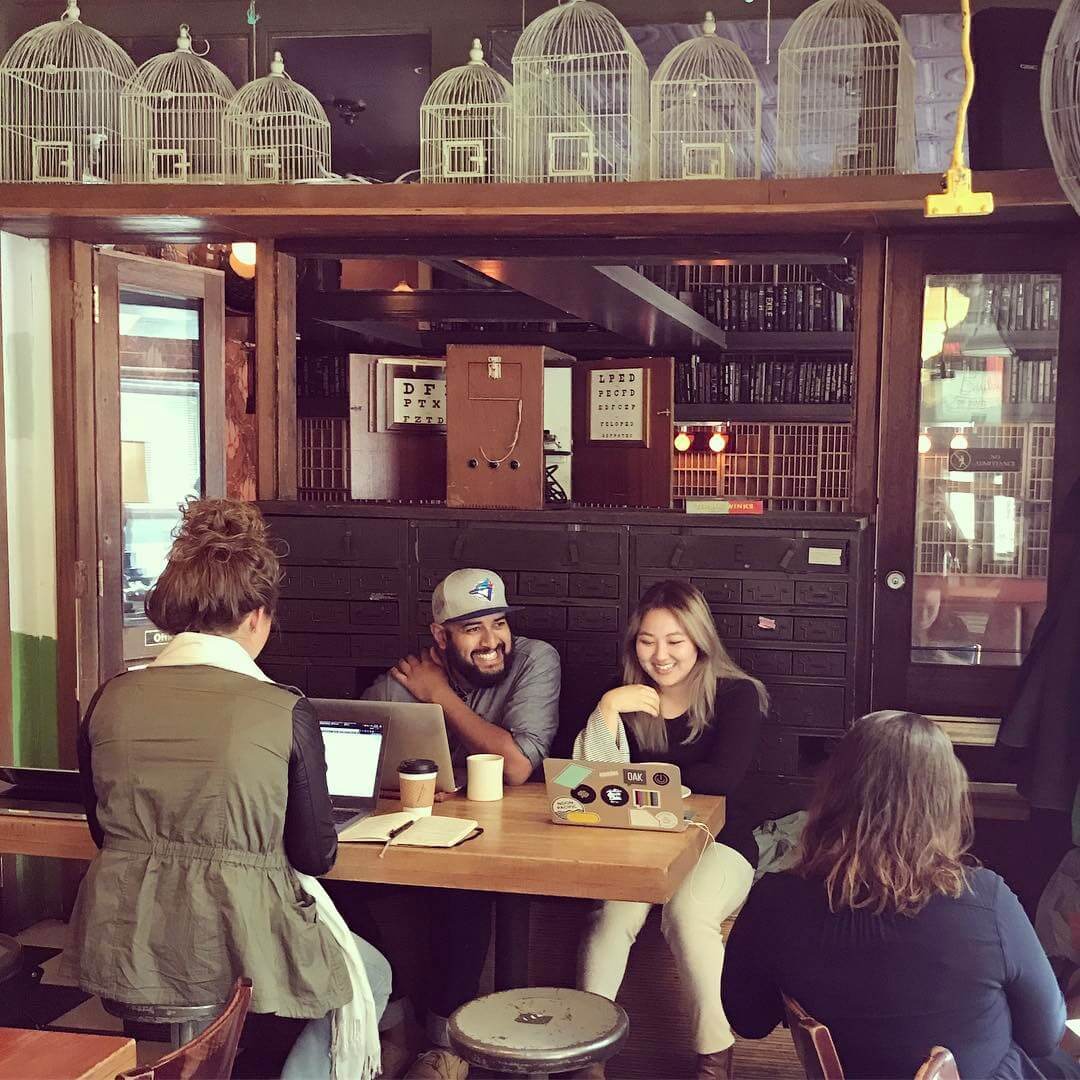 Recently we were having a conversation during a Meetup about times when you don’t feel fast paced enough, smart or even creative. Do you have moments like that? What do you do?
Oh definitely. I think everyone does. Especially in New York where hustling and working hard is truly a unifying culture.
I still consider myself fairly young in the creative professional life, but I’ve learned that I can’t rely on passion or ‘how I feel’ to get me to accomplish the things I want to do. Instead, I’m a big believer in intentionally designing and engineering my environment to make it easier for me to live my best day to day life. More seasoned and successful creatives seem to refer to this as the art of building your own creative practice. Honestly, it’s just a fancy way to describe behaving like a pro.

In moments where I don’t feel “enough,” I focus on self-care and being as intentional with my time as possible. I wake up earlier to go to the gym. Say no to drinks and go to my hip hop dance class in the city. Instead of watching Netflix, I’ll write out my thoughts.

For getting through the slump itself, I’ll set up my workstation in an appealing way that actually makes doing the work seem a little less hard. This is true for working out too — sometimes I’ll put my running shoes right next to my bed and go to sleep in my gym clothes. Setting up your desk with your favorite mug and music can be the equivalent. Willpower is overrated and isn’t always easy to muster up so I try to cheat the system. 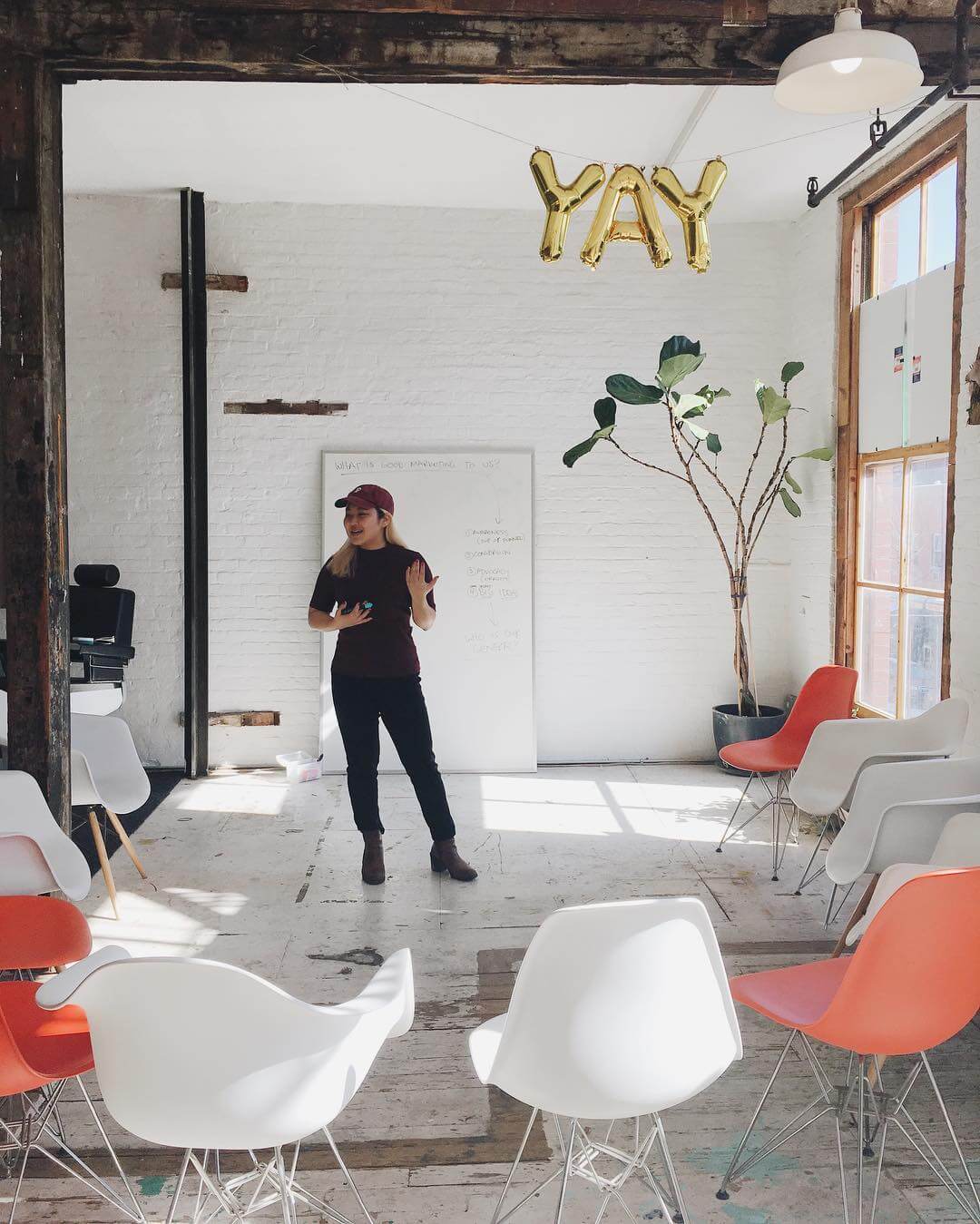 Tell us about 3-5 Women you admire. Also, your favourite books, websites, and communities.
Five Women
Jane Goodall: She’s always been a great hero of mine.
Annie Griffiths: Heard her recently speak at Adobe MAX and was blown away by her work.
Alicia Keys: Fan of her music first, but I also love that she is consistently using her position to push for positivity.
Michelle Obama: Because… she’s Michelle Obama .
Yoon Mi-rae: A South Korean female hip-hop artist who was a pioneer in the music scene. She’s overcome a lot of racism and challenges as a half Korean and half African-American person growing up in Korea. 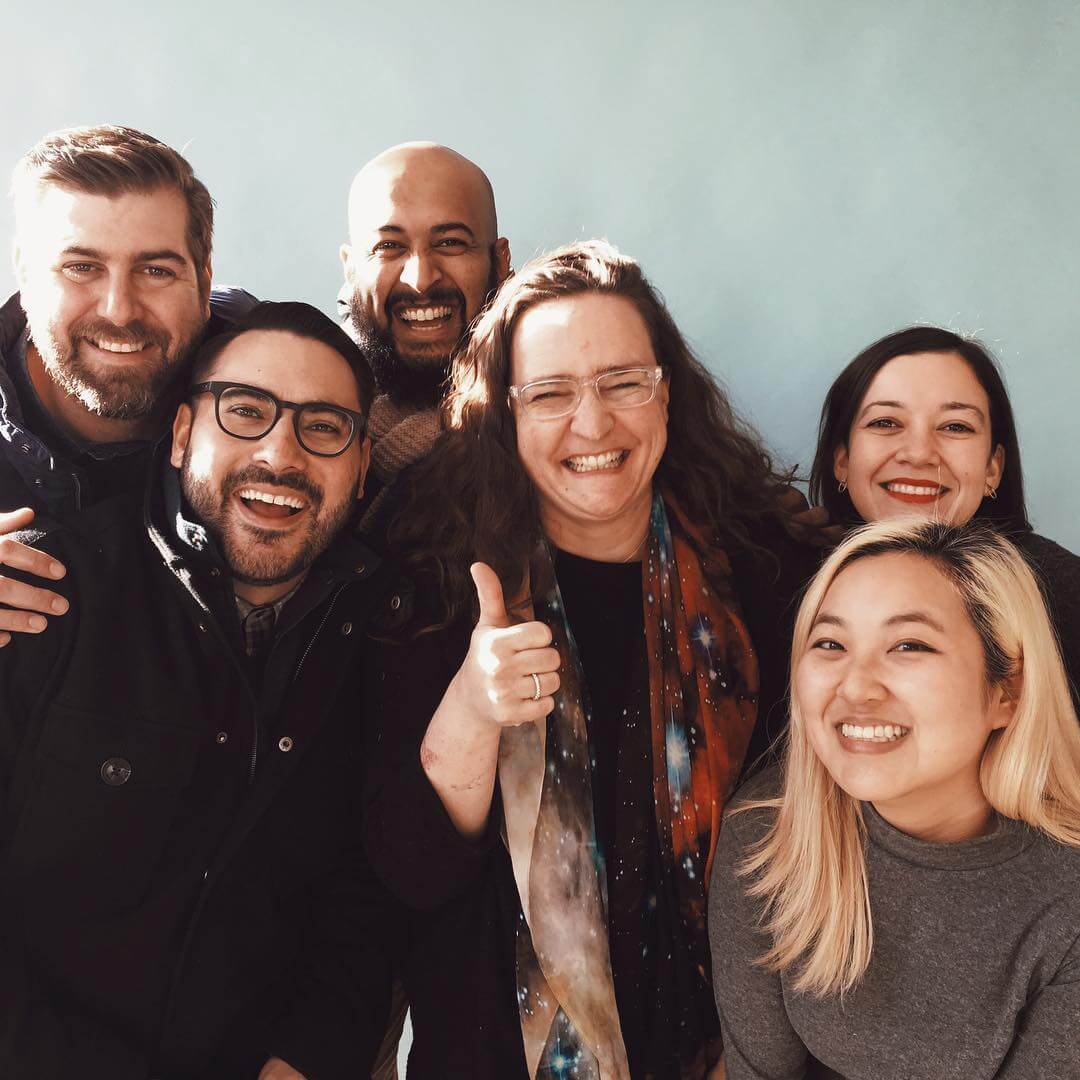 ●Favorite Books:
Tuesdays with Morrie by Mitch Albom
The Five People You Meet In Heaven by Mitch Albom
The Alchemist by Paulo Coelho
Unmistakable by Srinivas Rao
Bird by Bird by Anne Lamott
The Defining Decade by Meg Jay
Deep Work by Cal Newport

What do you love most about living in New York?
The thing I love most about living in New York City is that it forces you to grow and stretch as a person if you let it. Despite growing up in California and traveling a lot, I’d never been so intensely exposed to such a wide spectrum of people, cultures, communities, shows, and situations in a short period of time. I love that the extremity of all of it actually makes transplants like myself naturally concentrate on defining our ideals and finding how we want to fit into it all.
And once in awhile, when I make it above ground from the subway — the view of the Manhattan cityscape still manages to make me pause and soak it all in.