“Music is at once the most wonderful, the most alive of all the arts… and the most sensual.” Susan Sontag wrote.
Music is the sensuous, permeating vehicle of feelings, experiences and intimate thoughts; and Ajuka conveys this concept of music tremendously well. When you hear her sing, you’ll be transported to a place within yourself that is both soft and important. If you are Nigerian and a big music enthusiast, you’ve probably come across her music on Social Media, going by the name AjukaMusic.
Ajuka is an 18-year-old singer who is gradually taking Alternative music in Nigeria by the storm. She is a talented guitarist and soulful writer.
We asked her how she started singing and how she’s building her career in the Music Industry. 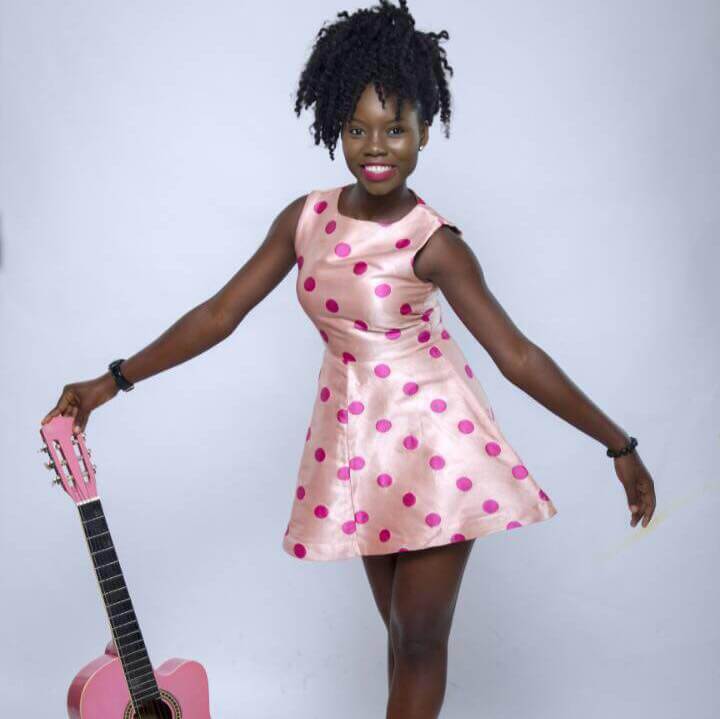 For Creative Girls: Your music is a creative muse! How and when did you start writing and then singing, or which came before the other?
The singing came first, then came the writing. I starting singing at age 6 in church just like everyone else. Lol. I have always had words and tunes bouncing around in my head and songwriting was the perfect outlet, I enjoyed it!. I started writing officially (got an actual songbook at that, the first of many) age 14 and never looked back.

What were your next steps after realizing you wanted to carve a path for yourself in music?
The first step was to get my family in my corner and let them know how much I enjoyed making and performing music, and get them to buy into my crazy dream to someday win a Grammy. They bought it and my sister became my manager – how cool is that? 🙂
I turned 16 in 2015 and that’s when it all really started happening. My sister and I were able to score some pretty cool gigs which were mostly pro bono, but I didn’t mind, I was performing live, I was living the dream! I also started to learn to play the guitar. I learnt the basics from my best friend and everything else on YouTube – lifesaver! I took vocal classes and songwriting classes too, all on YouTube.

Which artiste will you say has influenced your style the most?
More than one artiste and creative persons have influenced my sound and style of writing, but my top ten would have to be :

Artistes and creative people at large are shaped by experiences or different pockets of event. What experiences have shaped you and your music?
Growing up in Lagos (currently Africa’s biggest city) has its adventures and misadventures and these everyday experiences have found their way into my music.
In addition, being a young girl in a society and industry like ours influences the messages in my music especially to other young girls who listen to me. To teach them courage, self-love and a capacity to dream.

When you can’t feel your writing/singing mojo, what do you do? Do you have any rituals that jumpstart your creative and writing process?
Some exercise would usually work the magic or sometimes some sketching too. But for the most part, the music comes when you least expect it, so you better have your songbook or recorder ready. 🙂

What’s your daily routine and creative process like, what does a typical workday look like for you?
On studio days I spend typically 10 hours working on projects and come home quite excited and beat.

On non-studio days I spend about 4hrs on guitar and voice practice every day (which are mornings and evenings ). I do school projects for 2hrs at most ( in readiness for university) In the afternoons, then I spend about an hour trying to get better at sketching, and most times I end up going back to playing my guitar, I call it the unofficial practice time which is around 6pm (twilight ). I also dedicate three days a week to song composition, which usually takes up to 3hrs.
I also run errands for my mum every other hour.

We love how your producer works on your music! Tell us how you met your producer and about new projects we should expect.
Ahha! I love to tell this story :). Last year, we managed to get a slot to perform at Make Music Lagos and guess who else was on the line – Cobhams Asuquo, THE Cobhams Asuquo! Boy was I thrilled! I mentally made plans to fangirl him and maybe get some pictures for the gram 🙂 but I got something I never dreamt I’d have!
When he got off stage, my sister egged me on to go talk to him because she knew just how badly I would love to but couldn’t work up the courage. I eventually went, nervously and intercepted him just as he was gearing to leave, I went on to tell him how I was a fan of his work and was dying to work with him, he replied very sweetly that he wasn’t producing for other artists as he was working on his debut album. I retreated quietly and heartbrokenly relayed the news to my sister and a friend of the family who also came out to support me. Well, this family friend also tried to talk Cobhams into being my producer and got the same sweet but negative response. He, however, succeeded in convincing Cobhams to just hear me sing.

So there I was, in the of middle night, in a parking lot in front of my dream producer and this was my one shot. I managed to open my mouth, found my voice sang my heart and soul out. And that was the beginning of a relationship, partnership, mentorship and some big brother – ship 🙂
We have had a phenomenal time performing and working together. We worked on several covers;
“Skintight” by Mr. Eazi and Efya, (currently a soundtrack for a Nollywood movie in the works), “Mama” by Kiss Daniel and “Luv” by Tori Lanez.

We are currently working on an EP which features my soon to be released debut single, Sky High.
It’s all so exciting and I can’t wait to share it with you!

It’d be cool to be able to easily find the lyrics to your songs. Where do we go to find them?
My songs are currently unreleased, we would certainly have them on all major platforms for ease of access. Stay in touch on all my social media platforms to be first to know 🙂
Social media handles are :
Instagram: @ajukamusic
Twitter: @Ajuka_music
YouTube: Ajukamusic
Facebook page: Ajukamusic

Jacque Aye Of Adorned By Chi & The Soft Black Girls Revolution
Lisa Comfort, Founder of Sew Over It, is Reviving the Lost Art of Sewing in London
Dami Odufuwa is Kicking Patriarchy in the Butt with Wine and Whine NG
Wonderland of the Visual & Auditory: The Experience of Gabriella Mussurakis' Work
Meet Gladys Chibanda, the Young Entrepreneur Shaking the Zimbabwean Creative Space