Gretchen Gales is the managing editor and staff writer for Quail Bell Magazine. At 21, she has been published in about 30 publications, won six scholarships, and has received awards for her writing.

Gretchen once wanted to be a veterinarian, Shania Twain, and a writer all at once. She is currently working as a freelance writer while attending college for education and writing a variety of content, both nonfiction and fiction.

For Creative Girls: Wow, Gretchen, you’ve been published in about 30 publications and won six scholarships! That is very impressive. What fuels your drive?
Thank you! I’m the over-achiever all of the other students tend to hate in the classroom, but it’s what makes me happy. That is, doing my best when it comes to projects I’m passionate about. Obviously, that’s writing. Writing is the only hobby I’ve truly stayed consistent with throughout my life. As a kid, I wanted to be a vet, but that went downhill pretty quickly after a summer camp I went to decided it would be a good idea to take five to ten-year-olds to a spay and neuter clinic during surgeries. I nearly vomited and passed out at the same time. I ran home and hugged my mom yelling, “I don’t wanna be a vet anymore!” and had to completely rethink my “steady” career choice. I always wanted to be a writer “on the side” regardless of my career, so getting as far as I have now has been amazing. Always keep trying. That’s the key, being persistent and reflective. I’d say another part of my drive is just hearing, “I really enjoyed your recent piece,” because then I know someone is watching and might actually like what I’m writing or that what I have to say is important (even if it’s a more silly piece).

I also want to point out that some of those scholarships I didn’t win instantly. Some I had applied for repeatedly, as in three years in a row. I’ve also lost count of how many scholarships I’ve applied to in the past, but last year I’m pretty sure it was at least 10.

Is there a major experience or issue that has impacted or changed the course of your art and writing?
I graduated from a rural-suburban high school and decided to go to school in the city. Granted, the city isn’t too far from where I grew up, but I only went downtown for events. I had won 1st place for a fiction piece of mine in the county, so I felt cocky going into the English program at VCU (where the founding editor of Quail Bell Magazine attended). Nothing kills an ego like getting anything below an ‘A’ on a writing assignment, especially in a freshman-level English composition class. It forced me to slow down and become more thoughtful about my writing and prepared me for ruthless grading in upper-level English courses. As for what I write about, I’ve been exploring a lot of social justice issues, probably because my university is very focused on service-learning.

We like to understand how writers navigate productivity. What is your daily routine like? Tell us what a day in your life entails?
I can’t say every day is a set routine anymore because I’ve started a graduate program, but I always try to submit a pitch or a completed piece somewhere a couple times a week. I’ll try to read at least one article per day if I can’t pick up a book that isn’t an educational theory. I love The Establishment because they publish some really amazing voices you miss out on in mainstream media.

How do you define creativity? And what methods do you have for dealing with when your creative mojo is low?
Creativity is the resilience to keep moving mentally, no matter what kind of setback.The secret is to keep writing and submitting your work no matter what. I’ve thought I “lost” my writing ability on multiple occasions. Notably, my freshman year of college when I kept submitting work to my school literary journal. We have two literary journals, but I wanted so badly to be validated by this one particular literary magazine. If I was able to be accepted into that journal, I was officially a great writer (as if an acceptance to one certain publication somehow verifies one’s writing skills, but my logic on what success meant freshman year was very flawed). I often felt disheartened by a lack of response or flat out rejection. Sometimes I still think I’ve “lost” my ability to be creative or write, but sometimes my mind just needs to recharge before going back in. I recharge by just reading something that doesn’t require too much thought or doing a craft project. I might listen to music while walking outside and randomly get an idea.

Which book or piece do you consider a must-read for female creatives?
It’s always hard to pin down the best ones, so I’m mostly listing what comes to mind. I loved Joanna Valente’s Marys of the Sea for its unflinching confessions and relevance to the post-election United States (i.e. women’s rights to their bodies). Fast Fat Girls in Pink Hot Pants by Artress Bethany White is another good one for exploring race in both the North and the South of the U.S. Like I mentioned before, The Establishment is so great at publishing a diverse set of women’s and other marginalized voices.

If you had a superpower what would it be and what would you change?
I’d be able to fly, simply because I’m so deathly afraid of heights that I feel it would be beneficial. I could slowly condition myself to not be a big weenie.

We love your essay, “Sophie Scholl and the White Rose“. What prompted the process of thought and writing?
Quail Bell needed Women’s History Month essays, so I wanted to write about a woman I knew of that deserved historical recognition, and that was Sophie Scholl. I learned about the White Rose movement in high school for German class. We had to sit down and try to read the book of the movement written by Sophie’s sister Inge. I’m a religious person, so I really connected with how Sophie’s faith helped keep her brave and resilience. I think the overall message of standing up for what’s right is a fairly evergreen topic, no matter what era it happened in. It’s hard to find articles that tell the story while also incorporating what the leaflets they distributed said (which is some really smart material worth reading). It seems to be one of my most popular stories, so I think I did something right!

Tell us about 3 women you really admire.
I was first introduced to Dorothy Allison’s Trash last year and got to see a screening and a talk of Bastard Out Of Carolina. She’s blunt and funny but also someone asked her if it was hard for her to watch some of the traumatic scenes she based off of her own experiences, and she admitted it never got easier, but it was necessary to show and tell in her novel. I think you do have to be exposed to something uncomfortable every once in a while so you cannot turn away from injustice. Besides her books, Roxane Gay’s Twitter proves you can be an assertive woman who is also successful. Malala Yousafzai has done so much for education at 19 and exhibits bravery beyond my comprehension.

Share what you are currently reading with us.
I’ve been trying to go through my stash of books I got from AWP this year. It was my first AWP and I never expected so many free books to be thrown my way. Although I reevaluated “free” after I had to drag them all on the train. I’m incredibly impressed by the one I’m reading right now called Voice from the Attic – Volume XXI. It’s a literary journal edited by Jan Beatty and produced by Carlow University that collects poems and stories by women taking Beatty’s Madwomen in the Attic writing classes. I’ll also be writing a review of Andrea Jurjević’s Small Crimes, a poetry collection that won the 2015 Philip Levine Prize. 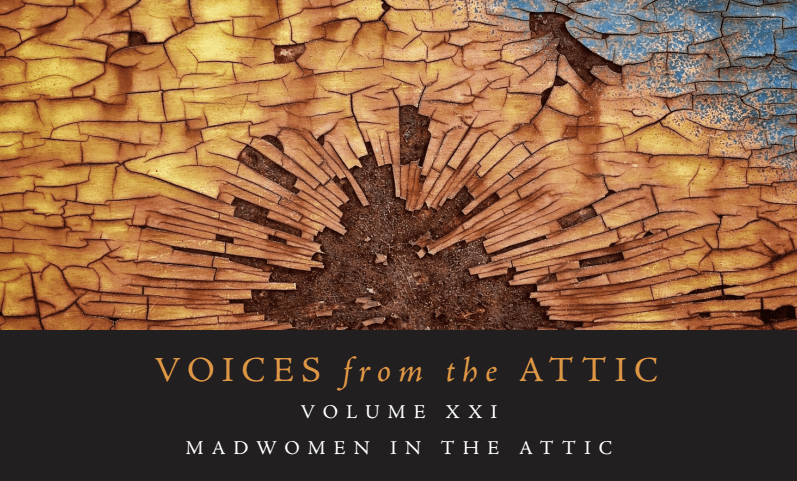