8 Myths About Creative Ladies to Debunk

As a creative, irrespective of what motivates us, fuels our interest or inspires us, we can all agree that creativity is a common factor that we all have. This ability can be inherent, a natural gift, but can also be learned and taught. 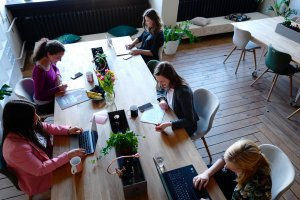 Some might not agree with the statement made above, but there’s no disputing that creativity has no discriminations. It’s inherited, given, shared, and earned without bias. Therefore, it’s funny that stereotypical assumptions of the recipients hold till this very day.

Female creatives are viewed under an objective lens of societal expectations and traditional norms, giving room to discrepancies and myths which need to be challenged and debunked. Therefore, outlined below are 8 myths about creative ladies to debunk.

Myth 1: Creative ladies are not educated.

Over the years, the society promoted the thought that creativity was not for intellectuals and female creatives were not left out. This is false because we have several educated female literates and scholars who are not afraid to pursue a creative career. Interestingly, the years of education and experience might even serve well to be advantageous.

Myth 2: Creative ladies are not tech-savvy.

Just like creativity, being digitally conscious, technology conscious, and social media savvy does not come with a prejudiced preference. Unlike popular belief, there’s now an encouraging increase in females who can integrate technology with creativity and applied skills, creating improved, and better results.

Myth 3: Creative ladies charge less for their products and services.

Running a business, making profits, and earning an income should not be limited by whether or not a male or a female behind the wheels. If a female can deliver according to the expected needs and demands, she deserves a right to earn the same amount or set the same price as her male counterparts.

“I’m sure she isn’t cut out as a professional” seems to be what others think when they see a female creative. Have you met a boss lady, a female working in the corporate world? The same amount of passion, interest, and energy she brings to the table for a creative lady. So no, creative ladies aren’t lazy.

Movies have depicted that a creative lady can be heavily invested in her work, having little or no social interactions, or have too much time on her hands due to her nature of work. In reality, most female creatives have a good work-life balance as there’s a place for her work, passion, relationships, and fun in her life.

Again, some movies have depicted creatives as wild, eccentric, and heck, even unstable, usually attributed to the fashion sense of the female character.  Debunking this belief, one’s personality and choices influence what a creative lady exhibits, not simply because she is a creative.

Owing to the popular opinion that being a creative might not be a good career choice, people believe that female creatives lack a stable source of income and are regarded as hustlers if she runs a small creative business, alongside her work. If the shoe fits, no one should be judged for pursuing their dreams and working hard to make it profitable.

The ability to run a successful business while managing partners and workers is also a leadership skill. Coupled with creativity, and other complementary skills, a female is considered to have leadership qualities like her male counterparts, and shouldn’t be cast out of the leadership pool.

Creativity should be respected and rewarded, with more support, acknowledgment, and appreciation shown to creatives in general, without excluding the female creatives.

Therefore, it’s encouraged that misleading opinions on general knowledge and myths about certain issues are debunked, to stimulate more positive developments in the creative space.

Author’s Bio
Bukola Oladeinde (Vytorrea) is a storyteller and strategy enthusiast who creates content and copies, to actualize marketing-communications goals for brands and businesses.
As a professional volunteer and creative, she loves indulging in stories, books, movies, and delicacies.
You can connect with her via the following links:
IG:https://www.instagram.com/vytorrea/
LinkedIn: http://www.linkedin.com/in/bukola-victoria-oladeinde

My "Get Shit Done" List for 2018 | Ifedayo Ward
Quotes are Your Daily Basis Lifesaver | Annette Kariuki
For the 9-5 Creative: Which Health Screening Tests Do You Need at Work
Valentine's Day In Africa: Some Cool Gift Ideas and Experiences | Lorna Abwonji
Woman To Woman Is Hiring A Social Media Manager