Cheyenne Ewulu is a host, content creator, pop culture lover and all-round black girl nerd; and she personifies these through her active life on the internet.

With four Youtube channels (mind-blowing, right?) under her belt and presence on other social media platforms, she’s definitely on the rise and one to watch. Cheyenne aka Chinenye is truly the “Jack of all trades and learning to master them all”. But we expect no less from an Igbo girl.

In our chat with her, she shares how she became a badass at what she does and her plans for the future.

For Creative Girls: How did you get started creating content for the web in general and video content in particular?
Cheyenne Ewulu: When I was in high school, I was active in theater arts. I love acting and portraying other characters. But, because of personal things, I could never be as active in theater as I wanted to be. I couldn’t be apart of plays because I had responsibilities that forced me to miss practice. So one day, I logged on to Youtube and watched a bunch of comedy sketches and thought “I can do that! I’m funny!”. Thus, my first ever youtube channel, Cheyenne Techno was born (please don’t mind the scene kid name. I was in high school). I borrowed my dad’s camcorder and started filming all types of videos from rants to song parodies, to sketches.

You studied Emerging Media and Communications at the University of Texas at Dallas — which is a very interesting degree. Why did you choose to study it? Has it been relevant to your chosen career path? In what ways?
At first, I was a Computer Science major. But after the first year, I decided to change my major to Emerging Media. I was active in our TV program which involved a lot of journalism. I wanted to do more of it, and that’s when I found out about the EMAC major. It helped me to sharpen my writing skills, that’s for sure, and later on I went on to creating my own blog, but ideally, I’d like to be an actress and/or host/entertainer. It’s a good degree as far as finding a stable job in order to pursue your hobbies go. 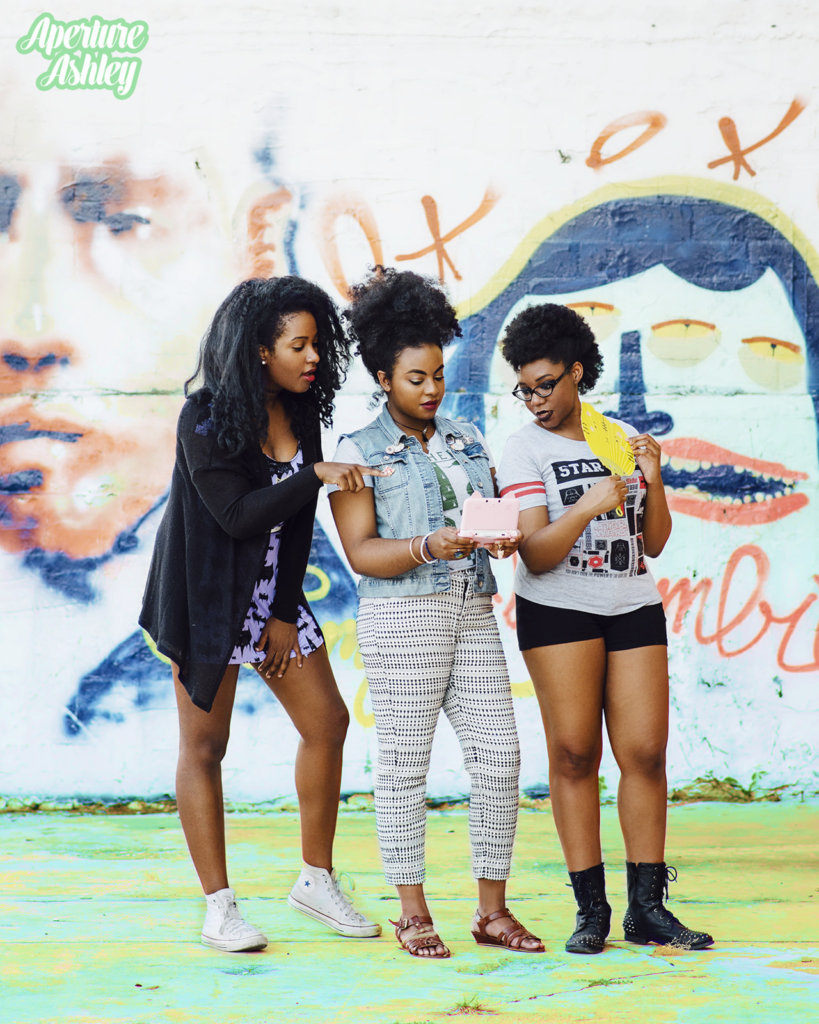 Your Youtube channels Pretty, Brown and Nerdy and Nerdy Naija are quite unique, being ones that focus on all things nerd culture whether it be Anime, SciFi, comics, TV shows, movies and games. Tell us about them.
Well, Pretty Brown & Nerdy was an idea I pitched to two of my close friends one day. We were just kinda like, “Hey, why aren’t there any black girl nerds on youtube? Let’s be black girl nerds on youtube!” and that’s kinda how we came to be for the most part. We just wanted to create that representation and make a name for ourselves while doing it. As for Nerdy Naija, Camille from Pretty Brown & Nerdy actually came up with that name. The channel spawned from me wanting to post a lot of solo videos on the PBN channel, but not wanting to clog the PBN channel with my solo videos. I should probably update more on it!

We are super DC fans! Tell us about your partnership with DC comics.
DC comics is so awesome. They always create opportunities that put their fans in the spotlight. They actually have a Youtube channel called “DC Fans” channel, where fans create original videos to be uploaded on the channel. I contacted them, and they ultimately liked my videos and wanted to see me do more for them. So they send me things, and I review them and or do unboxing videos for them. It’s been pretty awesome. I don’t think my shelf can hold anymore pop figures though (just kidding. bring them all on). I actually won a trip to San Diego ComicCon through DC Comics (and WB). It was an amazing experience. I met so many of the DC Entertainment and Warner Bros team. They’re all really great people, and we still keep in touch.

On women getting their capes on. Do you think more women characters will be created or the old male characters will be morphed?
I would like to see more original female super heroes created. I love that they are adding more already, don’t get me wrong, but taking the identity of an iconic hero and just changing their gender to me is kind of lazy. We deserve original characters. Women are bad ass.

What’s your view on black characters in the Comic Universe generally?
I would love to see more black characters in the spotlight. I think the best black character DC Comics had was Static Shock, but he’s landed himself in comic book purgatory unfortunately. But now they’re putting Cyborg on the frontline with Justice League–which is great–but I’ll be even more impressed if they give him a solo film. I think so far the best characters that marvel has in their universe are Storm and Black Panther. Both black. 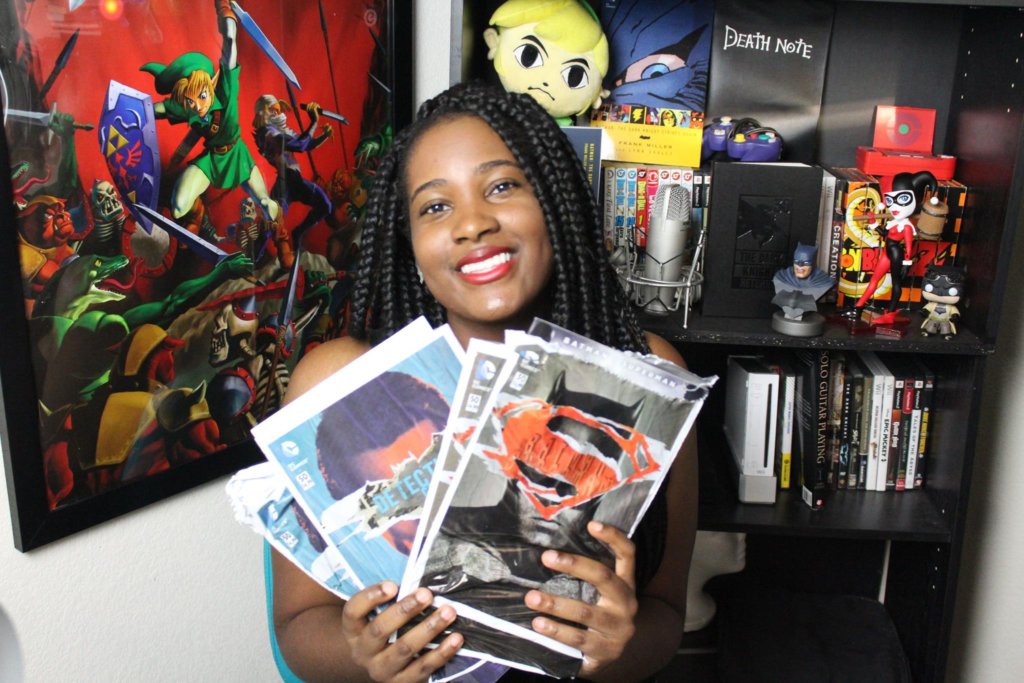 Teach us how to turn our comics addiction into something vibrant.
I always say, if you can, try to turn your hobbies and interests into your job. My goal is to get paid for being a nerd. I’m pretty much a full-time content creator right now and 50{7516946f8b0c1a6ede41439c3ae11d430d01c6cb1788b8e4cf8ff90b3f78e65d} of the content I create is nerd related. It’s awesome.

You were/are running your YouTube channels, in addition to other gigs and doing school work all at the same time. That’s a really busy life, which means you believe in the powers of multi-tasking. How were/are you able to combine all of them? Please share your tips with us.
It’s as crazy as it sounds. I’m actually not that great at multitasking which I hate. I’m learning to be better and more consistent when it comes to making videos. This is the reason why, unlike other Youtubers, I don’t have a set video schedule. I think it’s all about remembering to balance what you love with IRL tasks. My goal is always to 1) entertain and 2) turn my hobbies into something more. My subscribers help to motivate me the most. When I see comments or tweets that read “Please upload more!”, it makes me want to…well…upload more. I hope this helps? It probably did not, I’m sorry.

How do you define creativity?
I actually took a whole class on “creativity” and I still have a hard time answering this question whenever it’s asked. My professor would be so ashamed. Creativity to me is the use of any idea that you come up with in your head. Regardless of if it’s inspired by something or someone else.

What is your creative process like? How do you constantly come up with ideas for new content?
A lot of my video ideas come to me while I’m taking a shower, or around 3AM in the morning when I can’t sleep. As soon as I think about something clever, I (usually) write it down in my notes on my phone. I have like…folders on top of folders on my phone filled with video ideas. Some I never even brought to life. 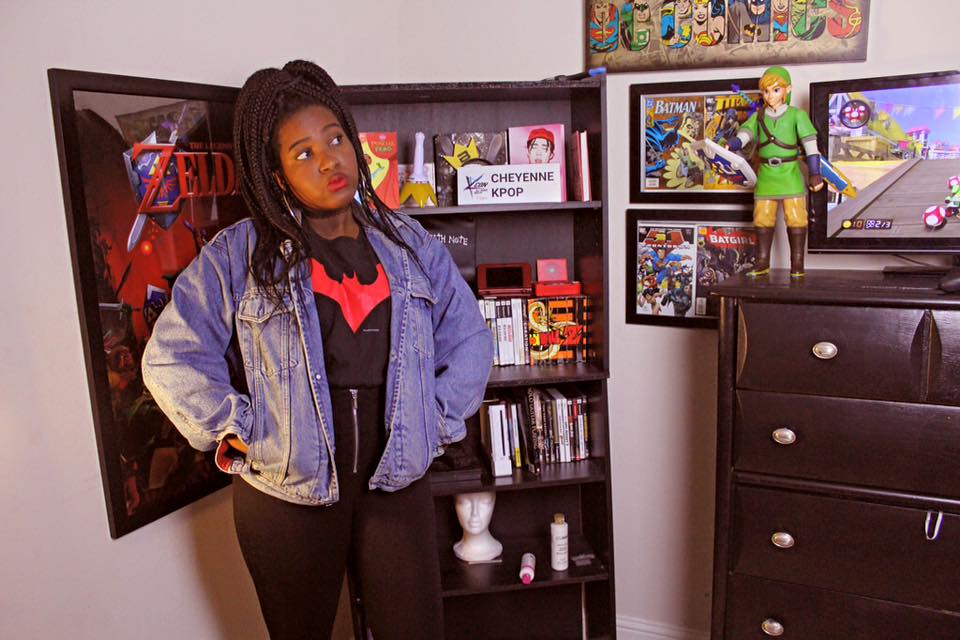 What are your future plans for your career? Where do you see yourself in 5 years?
In 5 years, I see myself taking over Hollywood. I want to be at the top of my field. I want to be up there with the Tiffany Smiths and Zuri Hall’s. I want to be doing red carpet interviews and to be a permanent host on an establish television show. I also want to do acting!

Video content creation is seen as the hottest thing at the present and will only get bigger in the foreseeable future; more people now view this as a viable career path. What advice do you have anyone interested in pursuing it seriously?
Take it seriously, but also have fun with it. Don’t treat it as something that you can just drop then come back to whenever. If it stops being fun, then it’s not for you. Don’t do it for the money (because you will be highly disappointed), do it because you love it and then the rest will follow.

Read more on this interview on That Igbo Girl.

All images courtesy of Cheyenne.