As a creative in 2023, you are likely well aware of several AI tools available to help you get your ideas off the ground and bring them to life, ChatGPT is one of many such tools revolutionizing the ideation process.

In November 2022, over 1 million users jumped on yet another AI wagon designed to make life easy. If you’re wondering how it started, what its limitations are and why you should care as a creative, then keep reading.

A backstory to ChatGPT

Have you ever heard the phrase ‘Y combinator’? an idea that started out as a boot camp boomeranging into a start-up accelerator that has funded over 3500 companies? Well then, you should know about its former president Sam Altman. This young brilliant founder is one of the masterminds behind chatGPT powered by OpenAI.

Although open AI has previously worked on similar language models like GPT-3 and Instruct GPT, chatGPT seems to be its biggest fish yet. On landing massive partnerships with big names like Microsoft Corp, and perhaps threatening the massive dynasty of Google’s search engine world, openAI is said to be on a sure path to revolutionizing human-computer interaction.

What exactly is chatGPT?

ChatGPT is popularly referred to as the greatest chat bot existing with an ability to keep up conversations, respond to follow up questions, decline inappropriate prompts and achieve quite some interesting tasks. A more technical definition would describe it as a tool based on the GPT-3 language model, trained on 500 billion pieces of texts and 175 billion artificial neurons.

Just in case you’re wondering what a language model is, I have an easy to understand definition for you. Language models are the next big thing “overtaking the traditional search engines as a primary means of online information”. See why chatGPT might be a threat to the Google search engine dynasty? And clearly, Microsoft Corp is here for it!

What are its Limitations?

“Everything has limits. The Universe has limits — nothing outside the laws of physics can happen, no matter how much we try — and even the infinite — the set of natural numbers is infinite, but it doesn’t contain the set of real numbers.”

This quote from Alberto Romero aptly captures everything that needs to be said about any limitations experienced by users of chatGPT or any technology.

However, let’s go through the experiences of some users after their exploration of chatGPT

Just so everyone is clear: ChatGPT is still just a language model: just a text synthesis machine/random BS generator. Its training has honed the form of that BA a bit further, including training to avoid things that *look like* certain topics, but there's still no there there. pic.twitter.com/M6cbvYmdqP

What is wrong with #ChatGPT 😂😂😂

ChatGPT is incredibly limited, but good enough at some things to create a misleading impression of greatness.

it's a mistake to be relying on it for anything important right now. it’s a preview of progress; we have lots of work to do on robustness and truthfulness.

These and many more limitations as detected by users is why many would rather refer to it as an imagination enhancing tool rather than a viable source of information.

Why Should You Care?

Based on majority feedback from users, it’s safe to say that ChatGPT stands out among other language models because it’s free, more human in interaction and has an amazing user experience. Plus, who doesn’t like to play with bots that talk like humans?

If you are working on a screenplay with a partner, you might input a few scenes and let the chat GPT generate ideas for dialogue, character development, and plot twists.

Yes, you guessed right. Some parts of this section  (although minute)  were generated by chatGPT with a lot of human touch. So yes, with the right prompt, you can write articles with specific word counts and direction with chatGPT. Or better said, chatGPT can write it for you. 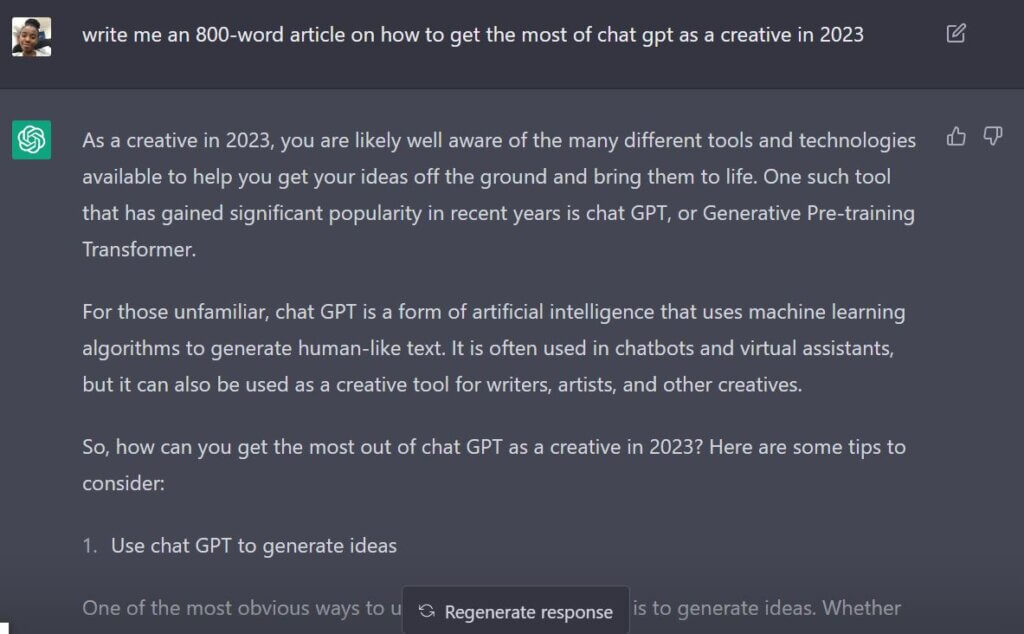 Chat GPT snapshot from the author

You can also check out more valuable  tips from Alexandra Fasulo

To Use or Not to Use AI?

From the Jan 9 version update,  it’s obvious that there will be more work done to improve on chatGPT’s deficiencies. However, no specific date has been announced on when it’ll be monetized.

also, once a technological revolution starts, it cannot be stopped. but it can be directed, and we can contintually figure out how to make the new world much better.

While we await the big announcement, taking advantage of this tool might save you some time, amplify your creative efforts or help you try out things outside your skill sets. So, give it a try! After all, technology flows in the direction of a simpler life for all humans. 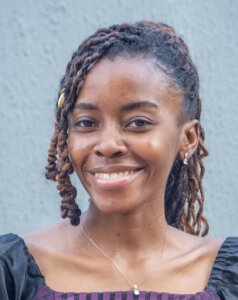 Ifeoluwa Alabi believes strongly in the dynamic power of words to control any narrative, evoke a desired emotion and propel a specific action. As a content Strategist, she designs conversation that helps improve overall brand and user experience. She is also in charge of communication and editorials at For Creative Girls

Weekly Creative Pin board: 7 Amazing Ideas, Tips, Executions & Campaigns Seen This Week
Dear Creatives, Sometimes I Wonder When I'm Going to be Known for My Work
Could Moving Abroad Be The Catalyst to a Successful Career?
Covid-19 Social Distancing Impact Stories by Lorna Abwonji - Part 1
Advice from Creative Women in IT - How to Thrive in the Industry?