In the last couple of years, a lot of industries have been working hard at inclusion for women, especially in Leadership positions, this clamour for inclusion is something that should also be at the forefront for African women and the crucial place for achieving that growth is through the media. Running For Creative Girls has put me in a state of constant awe of the awesome things women are creating in different parts of the world.

Sharing the stories of African Women is essential, especially in a culture that silences women. These stories are becoming the backbone of everything that we do. Knowing and being more and more conscious of the fact that storytelling is a powerful tool for changing and channeling a continent and a world that is geared towards positivity, empowerment and women emancipation. We need to own our narrative and tell our stories, build campaigns that showcase our own growth, processes, and glory.
This need for a great point of convergence for African women is what Eliza Anyangwe saw and then decided to create a space that fills that need. Eliza created The Nziga Effect, a digital platform, and annual gathering to celebrate African women’s stories.

The Nziga Effect is named after Nzinga Mbandi, a 17th-century queen in what is now Angola, who managed to escape the “warrior queen” box that African women leaders in history are traditionally put in. Here was a woman who was fierce, yes, but she was also multilingual, a strategist and a diplomat. Reading Nzinga’s story inspired Eliza and she began to wonder: how would the narrative about Africa and its place in the world change if we knew more Nzingas? How would knowing our stories change us as women?
The African proverb “Until the lion can tell her own story, every tale will glorify the hunter.” is the guiding line for Eliza Anyangwe as she runs Nzinga Effect.

Eliza Anyangwe is a Cameroon-born, London-based writer, editor, and moderator. She was formerly at the Guardian. She joined the Guardian in 2008 as an editorial assistant on the award-winning Katine Project and in 2012, became editor of the Guardian’s Global Development Professionals Network. 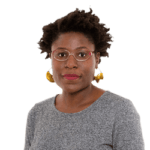 After going freelance in 2014, Eliza spent a year covering the transition from MDGs to SDGs for the Guardian as well as writing and commissioning for Guardian Opinion, and working as a producer on CNN Africa.
Today, Eliza is the founder of The Nzinga Effect, a digital publication, and communications agency focused on African women’s stories; guest lecturer on the international relations and communications program at IULM in Milan, and a fellow of the Royal Society for the Arts.