I was walking towards my home with a friend who was walking a little bit ahead of me as we were in a crowded place. We both were fully covered by our dressed and my friend was under Naqaab. We were walking through a marketplace where people were in huge throngs. Suddenly, a boy comes near me, grabs me from behind and touches my body, I was incredibly shocked and became completely numb. Before I could say anything, he runs away on a bike. It destroyed my whole mood.
The whole of that week I was thinking about why girls are so helpless. Switching on the TV, I see the news that a girl was made to walk the streets “naked”. 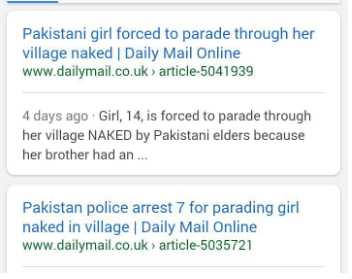 I was so heartbroken about why we always fall victim of these things and can’t do anything, or why I didn’t have any wings to fly as the boy did. I was still feeling disappointed about how many times girls face these types of things and cannot even tell others – then I saw Sharmeen’s controversy.
Sharmeen Obaid-Chinoy is an award-winning (2 Oscars) Pakistani journalist, filmmaker and activist. She is particularly known for her work in films that highlights the inequality with women. She received a backlash and torrents of hateful comments in thousand of numbers from people who were in support of the doctor who breached her patient-doctor privilege. These people went against Sharmeen, actors, speakers, people from every aspect of life took part of the charade on social media. 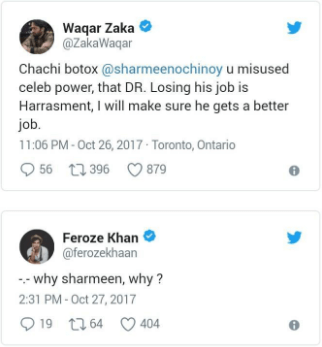 It was even a mocking point for others! 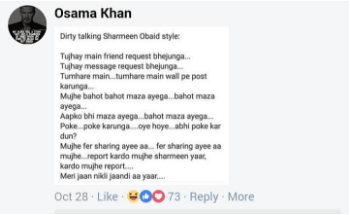 Let’s assume that Sharmeen is NOT a filmmaker or a public figure.
A Doctor’s place is supposed to be a place of solace and privacy, where everyone who comes in feels comfortable, either it’s related to gynaecology or neurology.
Now imagine yourself getting a request from that doctor you had done a physical checkup with the last time you were in the hospital. Imagine how upsetting that is, it’s just like the same way I feel about being teased by a random guy on the road.
So what? It was just a friend request.
Or so what? It was just a body touch, not rape. Do men ever know how a girl suffers when she gets “touched” in any part of the body? How many times does she blame it on being a “Girl”? How many times has she listened to that “it was your fault because you’re not properly covered” statement?

Now, Sharmeen was in deep anger! How can an “educated” person, a doctor from a well-reputed hospital send a request or like pictures on social media? It was not a random boy or a stalker as half of the population has decided to fixate on. It was the doctor who didn’t know his boundary. How many times has an ordinary girl shouted about the misbehaviours of others and how many times have you listened? The answer is, no one listened to an average or common girl. Imagine how many times some girls reported about that doctor but did not get noticed because that’s not a big issue.If Sharmeen complains about him, I am personally thanking her for saving others girls from being a victim.

Why do people have an extreme hatred for Sharmeen? So many people have named her the worst. 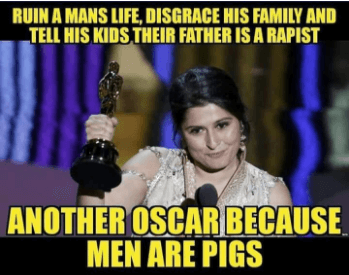 You can find abuse from the most educated to total illiterate people. Here I saw an image from those elders who always told their daughters to cover themselves. People are also saying that she did it all to gain ATTENTION. Guys, she has 2 Oscars! She is already famous. And if you think that Sharmeen is HIGHLIGHTING Pakistan’s bad or ugly sight to the world, then you should know that she was the only one who made a bill pass from Punjab assembly against honour killing. 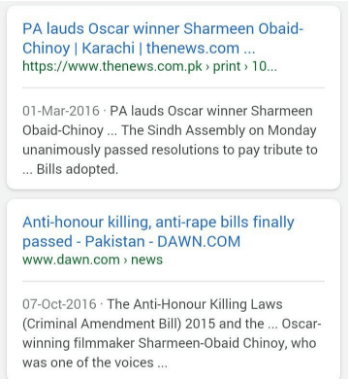 How many people applauded her for being a strong girl at least? If you can’t appreciate her, then you don’t have any authority to blame her. This mindset will always suppress women about how they can raise their voice.

I am not a Sharmeen fan. I am a fan of the mindset and philosophy that taught us to raise our voices against the wrong. You should know how to get your right, no matter what your gender is. Your Facebook comments are not effective to Sharmeen or doctor, but they can be effective when it comes to representing you. So please be aware that whatever you write is taking part in or against the truth. Let us move the society forward. I hope this read will help us to start speaking up against discrimination and assault. 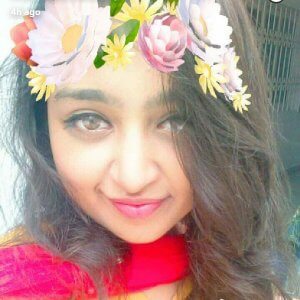 What Are Some Of The Things People Search For When They Add 'Women' To Their Google Search Queries?
Are You Okay?: Mounica Tata's Illustration of Feelings to Start a Dialogue on Mental Health
The In-Between Designers Journey: Kenyan Fashion Designer, Lorna Abwonji Shares Her Journey
How the Pandemic Has Helped Woman-Owned Businesses Grow
Content Strategies for Effectively Marketing a Fashion Brand on a Global Scale