Hit enter to search or ESC to close
InterviewsWomen's Rights

The right to education is one of the fundamental rights of the child. This right, however, is usually abridged for the girl child especially in Nigeria as a result of traditions which do not place any value on the education of the girl.

This is a dangerous trend, as a recently released report by UK-based charity Oxfam and Development Finance International, Commitment to Reducing Inequality Index 2018 puts Nigeria at the bottom of the ladder.

Among 157 countries, ranked in terms of their commitment to reducing inequality, Nigeria took the last position at 157 according to the report.
The report further said more than 10 million children do not go to school while sixty percent of these children are girls.

The northern part of the country according to official records accounts for a high percentage of out of school girls.

For instance, Aisha Abdul (in the recording below, transcribed here) said she was just fourteen when she was withdrawn from school to marry a man who was much older than her and who she had met only once.
Aisha Abdul:
When I was in SS1 during our PTA one day, a man just came to see me, he introduced himself as the person that wants to marry me saying, he was sent by my parents.
I said ok. He asked me a question, do you want to marry me? I said yes but not now. He said ok, then he left. On coming back for holiday, to my family house, I met everybody busy, they said I was going to be married to that very man.

Low perceptions of the value of education for girls are among the reasons given by the UN report to explain why girls are given out in early marriage. Surprisingly, in Aisha’s case, both parents are educated, but she said this did not help when pleaded with her mother to allow her to finish school before giving her out in marriage.
Aisha Abdul:
I sought an opportunity that very day to explain to my mother with a lot of courage, you know to tell her that I am not going to marry that man, that I don’t like him. Secondly that I don’t want to marry him at that time because I have a mission to accomplish. Then my mother looked into my eyes also and told me that with or without your consent if you wish you can die but you must marry this man. I said ok from there. I just stood up wiped my tears and I know that definitely, I have to do this. So I married that man, a family man, an uneducated man, a person with four kids.

Worst still, her husband forbade her to continue with her education threatening her with a divorce if she insisted.
Aisha Abdul:
I was feeling incomplete so after giving birth to 4 kids, I decided to gather the courage to tell him that I want to go to school. Then he said you want to go to school? But before I told him, I told my mother being the closest person to me, I have to tell her that I want to go back to school in fear of the consequences, then she told me that you cannot go back to school because your husband is uneducated. I said ok, then I went back to ask for my husband’s consent so that I can have his support to go to school. Then he said no that he is not interested. But I know that this is what I have to do.

But Aisha says her dreams to go back to school refused to die.
And so after 14 years of marriage and 5 children later Aisha says was forced to return to her parents with her children to pursue her dream.
Aisha Abdul:
Coupled with different issues, family issues, social issues and the fear of inferiority complex from my husband he just sent me out with my kids, I had to go back and live with my parents again with the kids. Because I don’t know what they will face upon living with their father since he is not interested in bringing them up again because he has another wife at that very time. So I have to leave with my children. I faced a lot of issues, a lot of problems surrounded my living with my parents, married and back home with 5 kids so it wasn’t easy. I was struggling with my own life as well as my children’s.

Aisha’s story may have ended happily as she got the education she wanted albeit, at a price, experts, however, say the lack of laws which protect the girl child, means that the country will struggle to achieve its full potential.
As a way of preventing the replication of Aisha’s experience in northern states, the Emir of Kano, Sanusi Lamido Sanusi had in May 2016 proposed setting the legal age of marriage at 17, or younger provided consent is given by a judge.
As part of measures to protect the girl child, the Kano Emirate is working with the state house of Assembly to enact a bill that would guide against early marriage and promote girl child education when passed into law.

Pai Gamde is the Chief Human Resource Officer of the Nigerians Stock Exchange and she believes that any society that excludes women is at risk.
Pai Gamde:
It is no secret that more than half of the world’s population are women are girls. And you can imagine what the world will be like if this population is left out of decision making, is left out of politics, is left out of the private sector, is left out of the public sector, left out of entrepreneurship just across the spectrum. One of the things we’ve been able to demonstrate is the value that a woman brings to a business. We have the staying power, we have the strength, we have the stamina, we have it all. And so why not include them, why should I be treated differently because I carry the gender female? Why can’t I just be a human being and be treated as one?

A social worker who runs a non- governmental organization Female and More, Kingsley Bangwell said getting an education helps to boost the self-esteem of girls which in turn increases the participation of women in governance.
Kingsley Bangwell:
If you look through the years we’ve always had low participation of females especially leadership governance. And I have always been convinced about if females are not part of governance conversation or leadership conversation, how will their issues be addressed. And we even stumbled on a global research and discovered that majority of the women that the test was conducted on talked about self-esteem as a deciding factor about how they think about themselves about what they even get involved in.

Aisha says she shared her story in order to encourage girls going through similar challenges to be optimistic and work hard stressing that nothing is impossible. 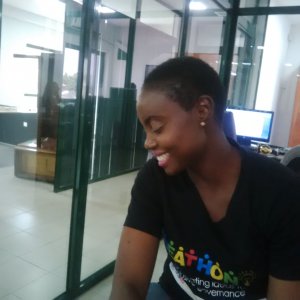 Emiene Odaudu Erameh is a journalist who is passionate about social justice.
She is an avid reader who loves to write.