All the Awesome Women that Made the Quartz Africa Innovators 2016 List!

Now in its second year, the Innovators series identifies and highlights a new set of impressive African thinkers. These are the awesome women on the list: 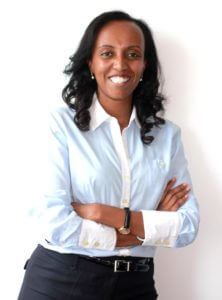 Amrote Abdella has held top positions at major international corporations such as the World Bank, World Economic Forum and Microsoft. A regional director for Microsoft’s 4Afrika Initiative, Abdella helps startups across Africa to get technical expertise, supports them to scale up while also enabling them to create African solutions which can scaled to global solutions.

Since its launch in February 2013, the Microsoft 4Afrika Initiative hasgrown to empower more than 273,000 small and medium enterprises (SMEs), 76,000 youth, 20,000 government workers and nine innovation hubs with access to resources, technology and skills.

With a passion for entrepreneurship, Abdella advises entrepreneurs looking to start businesses in Africa to always think of developing solutions relevant for Africa. She believes that the 4Afrika Initiative is perfectly aligned to accelerate the development of African solutions not just for African problems but the world at large. For her, just like in Africa’s case, the sky of possibilities is limitless. 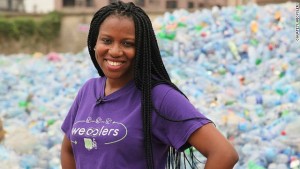 Along many streets of Lagos, Nigeria’s commercial capital, piles of waste have long been an eyesore. Bilikiss Adebiyi-Abiola’s recycling company,Wecyclers, saw that as an opportunity by cleaning up the city and putting some money in the pockets of those who help along the way. Using affordable tricycles to meander Lagos’ infamous traffic jams, Wecyclers collects recyclable waste from households in low income communities in exchange for points that can be redeemed for food, cash and household items. Wecyclers’ work has proven crucial in a city where only 13{7516946f8b0c1a6ede41439c3ae11d430d01c6cb1788b8e4cf8ff90b3f78e65d} of waste is recycled annually and as a result, it now works in collaboration with the Lagos state waste management agency. For the 6,500 low income households who typically live on less than $1-a-day now signed up to the service, Wecyclers is fulfilling Adebiyi-Abiola’s dream of turning waste into a resource for those “who need it the most.” She says, “Waste is currently a big problem for people living in poor conditions, but I want to turn it into a solution” Wecyclers has received grants from the MIT Public Service Center and the Steve Case Foundation.

Bilikiss is also on our list of 5 Creative Women in Nigeria’s Technology Space. 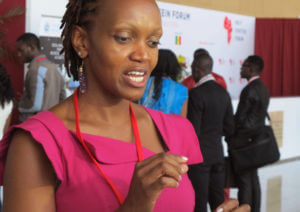 Evelyn Gitau has dedicated herself to researching how diseases affect one’s cells, specifically in children with cerebral malaria. With a specialization in cellular immunology, Gitau has helped spearhead internationally competitive research on disease pathogenesis and immunity from Kilifi, Kenya. She has also been instrumental in the development of a rapid malaria test despite the enormous challenges of getting the right equipment needed in her work. She is now seeking to develop a rapid diagnostic test for multiple infections with a simple drop of blood, resulting in rapid and effective treatment of malnourished children.

“In the course of her work, she became fascinated with both the overlap between severe malaria and other serious childhood infections as well as the interplay with severe malnutrition,” the Next Einstein Forum states.

Dr Gitau believes Africa needs to adopt new technologies that will improve how common diseases are diagnosed and treated. She also mentors young girls with the hope of inspiring many of them to become future scientists. 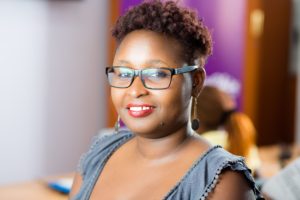 In 2010, Marie Githinji co-founded AkiraChix, a social enterprise to inspire and train the next crop of African women in the continent’s technology space.

Each year, AkiraChix admits 30 bright and promising young women from low income backgrounds to a one-year training and mentorship program.

The women are taken through year-long rigorous courses in programming, design and entrepreneurship with the endgame of equipping them with requisite knowledge that will give them an opportunity to be financially independent. This way, they are able to break out of the poverty cycle and changing communities, one woman at a time. In July 2015, one of AkiraChix’s co-founders shared a platform with presidents Barack Obama and Uhuru Kenyatta during thesixth Global Entrepreneurship Summit.

Nagged by an unwavering passion for technology, Githinji went on to co-establish eLimu, an interactive platform that engages primary school going children as a teaching aide with digital content. This has been a great boost to learning outcomes as many African countries move to implement digital learning programs in schools.Danai Gurira 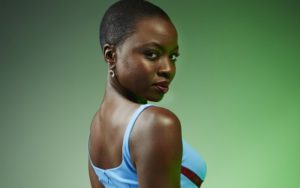 via The Daily Beast

Danai Gurira has had huge success in the US both on TV (as a popular lead character in AMC’s popular Walking Dead) and on stage (she’s written four plays in the last decade.) But 2016 proved to be a stellar year for the Zimbwean-American.Familiar, Gurira’s play about a Zimbabwean family living in Minnesota, opened off-Broadway, whileEclipsed, the story of the five women during the second Liberian civil war and starring Kenyan superstar Lupita Nyong’o, opened on Broadway and was nominated for six Tony Awards.

Gurira, who was born in the US to Zimbabwean parents and raised in Zimbabwe, has an MFA in Acting from New York University’s Tisch School of the Arts, and currently splits her time between Los Angeles and New York. She has taught aspiring playwrights and actors in Zimbabwe, South Africa and Liberia, and is president of the Almasi Arts Alliance, a non-profit that supports collaborations between African and American artists and organizations.

Gurira has focused much of her writing on women of African descent and of color. “My hypothesis is: people in the West can absorb African women’s stories without any shaken or stirred mixer,” she has said. “It can come directly from the source.” 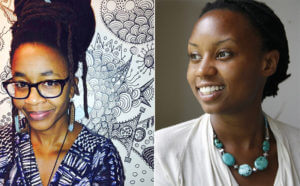 Okorafor and Kahiu are about to usher their feature-length animation film The Camel Racer into development, with the support of South Africa’s Triggerfish Animation Studios and the Walt Disney Company.

Okorafor is a Nigerian-American professor of creative writing and literature, who counts a PhD in English amongst her many academic credentials. She has written multiple novels exploring African-based stories of science fiction, magical realism and fantasy.

Nairobi-born Kahiu has an MFA in directing from UCLA and won multiple awards for her 2008 feature film debut, From a Whisper. Her 2009 science fiction film Pumzi followed an East African scientist’s quest to bring plant life into a post-apocalyptic world suffering from a devastating water shortage. Kahiu is also the founder of Alawi Entertainment, a film and TV production company. 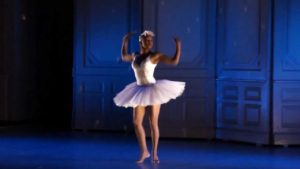 Dada Masilo grew up in Johannesburg’s Soweto township and wandered into a dance class because it looked like fun. That soon turned to a deep passion that saw her become a classically trained dancer and choreographer known for breaking the boundaries of traditional dance and infusing her identity and experiences into the classics like Romeo and Juliet, Carmen and nowSwan Lake.

This year, Masilo turned Tchaikovsky’s masterpiece on its head as she enthralled audiences in Europe, the United States and Africa. Her barefoot gender-bending choreography was met with rave reviews. You can watch her powerful and subversive solo here.

This isn’t the first time Masilo has broken through the traditions of dance. Early in her career Masilo was spotted by renowned South African artist William Kentridge. The dancer and drawer collaborated on a piece that used spoken work, video installations and of course dance.

Ballet was her childhood love, but as she grew, contemporary made more sense to her. Masilo is also fluent in traditional Zulu and Tswana dance, West African dance and flame. While her technique has won international acclaim it’s the message she creates with her movements that stand out—authentic, frustrating sometimes heart-breaking pieces. “I don’t just want to be a body in space,” she says. “I want to open up conversations about issues like homophobia and domestic violence, because those are realities at home.” 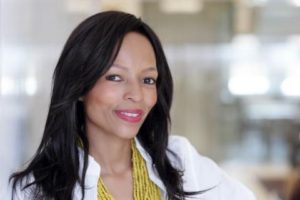 For Matsi Modise, it isn’t enough to be an investor or mentor. Modise sees herself as an entrepreneurship activist, determined to help South African startups and small business grow into viable entities. At Simodisa, Modise and her team analyse the challenges that prevent local startups from reaching the scale that could change lives.

Perhaps their most innovative and practical approach to Simodisa is the Startup kit that includes a bank account and company registration, technology infrastructure, mentorship and partnering and digital resources. Modise knows something about starting her own business. Modise began her career as a private banker, but soon turned to business consultancy, launching an advisory firm in her early twenties. Her experience has taught her that while most businesses have all the right ingredients, their founders don’t know how to make it all work together. 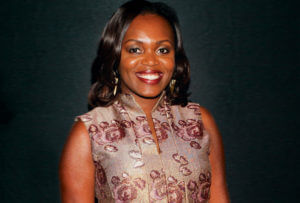 “Notice the shift in Africa’s consumer markets; consumers are asking for luxury African labels…We strive to create the positioning of premium African and global fashion labels through strategic approaches and connecting brands to niche or target clients,” she states.

She garnered international attention with her inaugural “100 Days of African Fashion” crusade, which ran from June to September 2014 with sponsorship from Martini, a global fashion brand. The campaign calls for the dedication of 100 days of every year to wearing different African designers. She has worn pieces from designers across Nigeria, Kenya, Ghana, South Africa, Uganda and several other African countries, giving them greater recognition. 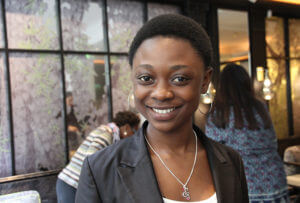 Winnifred Selby has taken an old idea of the bamboo bike—whose first appearance was at an exhibition in London in the late 1800s—and made it new again. After years of seeing local farmers and students walking miles every day, Selby founded the Ghana Bamboo Bikes, an NGO that makes bicycles from locally available material. Her goal was to kill “four birds“—employment, farming productivity, school attendance, and income—with one stone. Two years later, she founded the business arm of her organization, Afrocentric Bamboo, whose focus is exporting handmade bicycles—they sell for about $100 locally and $250 abroad.

Selby’s bikes are designed with bamboo, meaning they’re light and don’t rust. Selby says that tests show bamboo is especially good at absorbing bumps and even stronger than steel. The one-piece design of the frame means they are sturdy and there’s less need to replace parts.

Selby is now one of Africa’s youngest and best known social entrepreneurs. She was 15 years old when she started Ghana Bamboo Bikes and 17 when Afrocentric Bamboo was founded. Asked to give advice to other aspiring entrepreneurs, she has said, “There were so many friends who laughed when they heard about the bamboo bike idea. Some people will definitely discourage you, but one thing I’ve realized in life is that you have to be focused. People never understand your journey because it is not theirs to understand.” 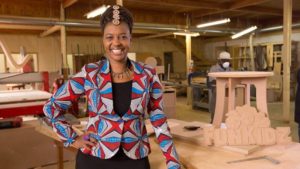 Ciiru Waweru is the founder of FunKidz, a brand for furniture, textiles, and accessories for children. Before FunKidz, Waweru founded and ran an interior architecture consultancy where she noticed the need for homegrown technical skills in manufacturing. With that in mind, she started FunKidz whose aim is to improve both education and manufacturing in Kenya. The company has an in-house training program for local carpenters and joiners. In a mentorship program, children learn about technology through animation and robotics.

Waweru’s education program and entrepreneurial efforts have been recognized by UNESCO, UN Women, and most recently the White House. At a White House event for women in business in Africa and the Middle East this year, first lady Michelle Obama praised Waweru‘s business and dedication to her community. She runs a mentoring program on technology and innovation for children.

Waweru’s goal is to bring the skills of Kenya’s artisans to a higher level. She posted recently on her company’s Facebook page that her team of carpenters or “fundis” are more than that. “We are not just ‘fundis’ we are designers and manufacturers with a global vision.”

To see the rest of the list, visit Quartz Africa.