On Pain & Art: Frida Kahlo’s Words And Work As Guidance

“The pain. The pain of heartbreak, the pain of sickness, the pain of betrayal. I take this pain, I express this pain, and I change it into something positive and beautiful. In these paintings, I am free of my suffering.”

Frida Kahlo’s paintings and art are some of the most revered artistic voyageur. She had a tumultuously beautiful and enduring life that threw her in the epicenter of pain from time to time. She was an artist and a woman much acquainted with pain, from physical pain to deep emotional pain. 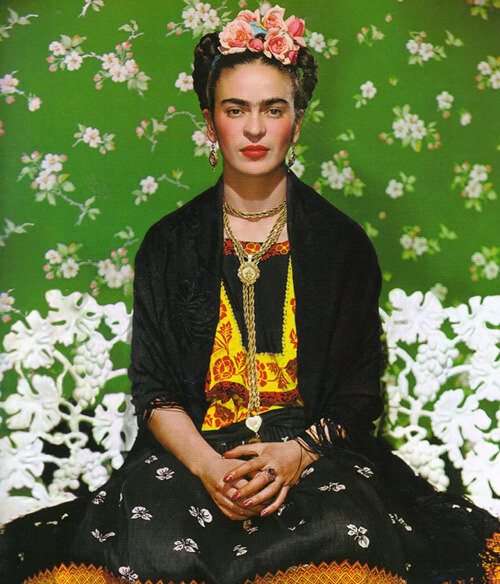 As a young woman, becoming a painter was not a part of Frida’s career goals. Her goal in life was to become a doctor but a tragic accident at age 18 changed the course of her life and steered her in new directions. She had suffered from Polio as a child and then gone through this tragic accident that seemed to cripple her life. She also dealt with a deep emotional wound from her marriage to Diego Rivera.

Frida Kahlo was a Mexican painter, who mostly painted self-portraits. Inspired by Mexican popular culture, she employed a naïve folk art style to explore questions of identity, postcolonialism, gender, class, and race in Mexican society. Her paintings often had strong autobiographical elements and mixed realism with fantasy.
In an old interview with Nick Bravo, Frida in pontificating how she started painting, expressed the need born out of a healing
“As a part of my healing process, I guess just to relieve my boredom more than anything else, I started painting. And it wasn’t like I had painkillers and experts putting me back together. Those were hard times and I really suffered. I mean, I didn’t get out of bed for a year. But I found an outlet, luckily, in my painting and that in some ways saved me I guess….”

In the course of the interview, she interjects with some of the prevalent issues of her life that appear in her painting and explores the inner workings of many women’s minds in the process, putting a picture to the struggles of womanhood, the inability to have a child and human struggles.
” If I was in pain, I drew it, in literal ways I portrayed the emotions I was going through. And I guess hat many women have difficulty sometimes expressing that sort of thing. Often women are repressed within the family structure and I guess that my paintings resonate so strongly with women because they are representative of the struggles women face. I think my work too was empowered by my struggles as a human. It was empowered by my love with Diego which ran a fairly torrid course as I’m sure you know. It was empowered by my pain, the constant pain that I went through as a result of the bus crash. And ultimately, it was heavily tinged by the fact that I was unable to bear children. That must be the hardest thing a woman can face, to be unable to fulfill her motherly urges which Nick, you cannot understand unless you are a woman. It is just so strong that urge… I still ask the God why I was denied that right. But maybe, maybe my work would not have been so far-reaching without my struggles. “

In a PBS post about an interview with filmmaker Amy Stechler and Kahlo biographer Hayden Herrera, the subject of self-portraiture as a way of dealing with loneliness and pain was brought, to which Hayden Herrera draws upon Frida’s childhood amongst other experiences.
“I’ve always felt that from the very beginning Frida Kahlo’s self-portraits were a way of attaching people to her. They often were gifts for friends, and she would want to keep herself in somebody’s mind. It’s interesting that she would paint Diego on her mind painting Diego’s image in her forehead. But then her paintings were to put herself in other people’s minds.
She just didn’t want to be neglected. She really wanted a lot of attention. And she wanted people to focus on her, and I think that comes both from the accident and brush with death with polio also, and maybe from other kinds of loneliness as a child. I think she was somebody who was deeply lonely. I think the paintings show it. Her disconnection between herself and space and anything that’s around her. In those paintings. It’s all about some kind of isolation. Which, you know, having polio and staying in a room for whatever it was, you know, along, many, many months would give her a sense of being isolated.”

Forty-something years after her death, Frida Kahlo has become a politically correct heroine for every wounded minority, her work fighting in our hearts and minds. standing tall for the things she always believed in.

Complement this with the video footage of Frida and Diego.