Simone Biles Keeps Serving Us Awesomeness on a Platter!

Simone Biles is the most dominant female gymnast in recent memory, possibly history.

For the past three years, she’s won every team and individual all-around competition she’s competed in. At the Olympics, she maintained that record, helping the American team to gold as well as wiping the floor during the individual competition. She also added a gold medal in vault, another gold in the floor exercise and a bronze on balance beam, bringing her total to four golds and five medals in all.

Her performance has been supreme so far.

On August 9th, Biles and the American women’s gymnastics team annihilated the rest of the field at the 2016 Olympic team event, turning it into a clinic. Team USA finished the competition ahead of Russia by a huge margin. 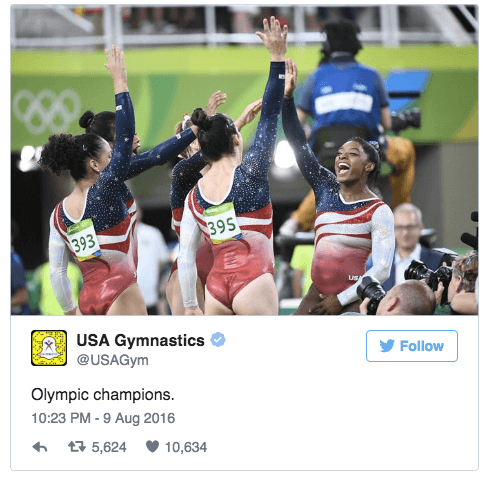 Biles was a huge part of the win, the only one of Team USA’s five members to compete in all four events. Her scores helped vault the team ahead of the pack and helped solidify their legacy as the best team in the history of women’s gymnastics.

For Biles, her first Olympic gold medals are the culmination of three years of gymnastics domination. But it’s just the beginning for this special, once-in-a-lifetime athlete. Here’s what makes Simone Biles unlike any female gymnast we’ve ever seen.

Simone Biles is in a class of her own when it comes to the floor.

Every elite gymnast has a signature event — something that sets him or her apart. It becomes what they’re known for. Nastia Liukin, the 2008 Olympic all-around gold medalist, was stellar on the bars. Liukin’s teammate Shawn Johnson won gold on the balance beam. McKayla Maroney, a 2012 Olympic gold medalist, was untouchable on the vault during the team final.

Biles’s signature event is the floor routine, an unparalleled display of her strength and stamina.

“Every single tumbling pass, she does a double-double on her third pass. That’s what 2012 Olympic gold medalist Jordyn Wieber mounted on.

Just four years ago, Wieber was considered one of the most powerful gymnasts in competition. In plain English, Biles’s third tumbling pass is equivalent in difficulty to Wieber’s first pass, a detail that’s significant because gymnasts typically perform their most difficult pass first, when their legs are the freshest.

In short, Biles can perform everyone else’s hardest tumbling pass after she’s completed two even more difficult ones:

Biles was born in Columbus, Ohio, but at the age of two, she and three siblings were taken from their mother, who struggled with drugs and alcohol, and placed in foster care. Ron, who is Simone’s grandfather, and his second wife, Nellie, agreed to take in the children. After an attempted reunion with her biological mother failed, Ron and Nellie adopted Simone and her younger sister, Adria, in 2003. (The other siblings moved in with Ron’s sister.) Simone considers Nellie and Ron her mother and father.

At the age of six, Biles began taking classes at Bannon’s Gymnastix, in Houston. She progressed quickly, earning an invitation to a junior-national-team camp when she was fourteen. In 2012, she was several months too young for the Olympics, which requires athletes to turn sixteen in the year of the games.

Her natural athleticism was obvious from the beginning, but the sport calls for gymnasts to be both thoroughbred and jockey, and Biles had not yet figured out how to rein in her power. On one of her first competitive vaults, Biles flew over the table without touching it, scoring a zero. “She can fly like a butterfly, but she can’t do a straight-body cast handstand,” Martha Karolyi told Boorman at the time, critiquing Biles’s ability to hit vertical on the uneven bars. At a meet in 2013, Biles wobbled wildly on the beam, crashed to her knees during the floor exercise, and flew off the bars before Boorman pulled her from the competition.

After that meet, Biles consulted a sports psychologist and had a session with Karolyi, neither of which quite explains the fact that, three weeks later, she won the U.S. Championship and, two months after that, a world title. Since then, she has not lost a meet.

Culled from The New Yorker and Vox.

Featured image via. Gif via.